The difficulty of assigning (R)/(S) to a stereocenter can be highly dependent on the way the molecule is drawn. For example, assigning the stereochemistry of A should be a cakewalk if you are the least bit familiar with the rules, while B  and C are a little more difficult. The thing is, you’re not always going to be given a structure with the 4th ranked substituent in the back. One thing I see students do a lot in this situation is try to redraw the structure to make it easier to assign (R)/(S) While this can be effective, it can easily lead to mistakes. Furthermore, when you’re dealing with cyclic systems like morphine [C], trying to draw the mirror image in a reasonable time frame might induce brain trauma.   [By the way, for B, you remember why the CH2CH2Br group is ranked 3rd, right? [Note 1]]

Instead of redrawing the whole molecule, just leave the hydrogen (or other 4th ranked substituent) in front and figure out whether the substituents ranked 1,2, and 3 go clockwise or counterclockwise. Then toggle (i.e. reverse direction CW to CCW or vice versa) to account for the fact that the 4th ranked substituent is in the front, and assign (R) or (S) based on that.  You end up with the same answer without having to redraw anything.

We also make these types of adjustments when we’re looking in mirrors. If I’m looking in a mirror at you holding out your right hand, I account for the mirror by “flipping” your image to know that you are really holding out your left. It’s the same thing with molecules. 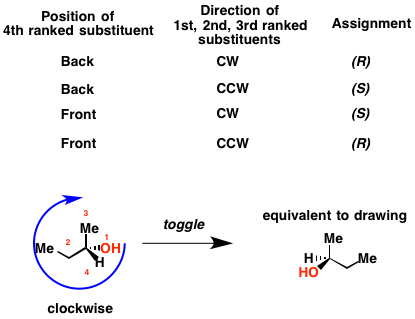 This trick seems obvious, but I’ve met enough people who don’t do it to make it worth mentioning. Determining (R)/(S) eventually becomes second nature, as does the ability to flip, rotate and invert chemical structures in your head. Much like London cab drivers, one of the interesting side effects of becoming an organic chemist is that it hyper-develops your brain’s spatial abilities.

[note 1 – Priority is determined at the point of first difference. Hence, of the two carbons attached to the stereocenters, CH2 and C=O, the C=O is given priority [O > H], regardlesss of whether a higher ranked element is further down the second chain. ]