[Note: the following article is intended as a quick review on atomic orbitals for students enrolled in an introductory organic chemistry class who are assumed to have taken general chemistry. It is by no means a complete introduction to atomic orbitals. Also: this post was co-authored with Matt Pierce of Organic Chemistry Solutions.  Ask Matt about scheduling an online tutoring session here. ]

1. The Most Important Graph Ever Made?

“If, in some cataclysm, all of scientific knowledge were to be destroyed, and only one sentence passed on to the next generation of creatures, what statement would contain the most information in the fewest words? I believe it is the atomic hypothesis that all things are made of atoms — little particles that move around in perpetual motion, attracting each other when they are a little distance apart, but repelling upon being squeezed into one another. In that one sentence, you will see, there is an enormous amount of information about the world, if just a little imagination and thinking are applied.”

Well of course a chemist like myself is going to love a quote that extolls the central importance of chemistry to scientific knowledge.  You can always trust a barber to find an uplifting quote about the importance of haircuts.

That caveat aside, if one had to name a single graph which could be saved from a cataclysm for the next generation of creatures, my vote would be for this one:

There is a tremendous amount of information about atomic structure embedded in this extremely simple plot, but the concept itself isn’t so hard to understand: “how much energy does it take to rip an electron off a neutral element?”

2. The Graph Is Explained By The Periodic Filling of Electronic Energy Levels (aka “Orbitals”)

Note how interpreting the diagram above flows naturally into a discussion about orbitals.

It was Bohr who first made the connection (1923) that the periodicity of atomic properties could be explained by the periodic filling of electronic energy levels.

In an early model of the atom (1913), it was imagined that electrons occupied progressively farther orbits around the nucleus, much like the planets in their ever-larger celestial spheres around the sun. While the “electronic energy levels” that Bohr described are indeed now called “orbitals”, the analogy ends there.  Bohr didn’t anticipate just how weirdly-behaved electrons can be, relative to planets. Nor did anyone else in 1913. [Note 1]

What do I mean by “weirdly-behaved”? Well, if one knows the position and momentum of Venus, for example, then one can then calculate its positions at distant future times  (such as the transit of Venus predicted for 3:48 AM UTC on June 10, 2498).

Heisenberg showed that at the subatomic scale, there are limits to the precision with which one can know both the position and momentum of a particle like an electron. The result is that our knowledge of the exact positions of electrons are fuzzy;  they have to be described as probability functions. What we call “orbitals” are in fact  3-dimensional shapes where an electron with a given set of quantum numbers has a 95% chance of being found. [Note 2]

3. Orbitals Are Defined By The Three Quantum Numbers n, l, and m

These orbitals have properties which are defined by the three essential terms in a particular form of the Schroedinger wave equation:

In addition to n, ℓ, and m, there is also fourth quantum number known as electronic spin, which can take on the value +½ or –½ for electrons.

What this means is that electrons in atoms “build up” in energy level in a well-defined pattern, starting with 1s (which can hold two electrons, with opposite spins), followed by 2s (which also holds two electrons) and then 2p (which due to the three possible values of m, can hold 3 × 2 = 6 electrons, and then 3s  (2 electrons) and so on. 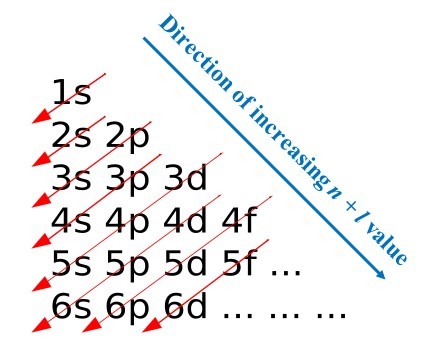 4. A Tour Of The Electronic Configurations of The First 11 Elements

We could go on filling up electrons, but that’s not the intended point of todays post, which is merely to review the atomic configurations of each of the first 11 elements while referring back to their first ionization energies as a guide.

So let’s tour the electronic configurations of the first 11 elements, shall we?

5. The 1s shell: Hydrogen and Helium

Let’s look at the (first) ionization energies for hydrogen and helium:

Hydrogen has a single electron in the 1s orbital with spin of either +1/2 or – 1/2 (they are of the exact same energy, except in a strong magnetic field).

We can represent the electronic configuration in two ways:

Helium has two electrons in the 1s orbital, each with opposing spins (+1/2 and –1/2), which we represent below.

It’s almost twice as difficult to remove an electron from helium than from hydrogen (compare: 2372 kJ/mol versus 1312 kJ/mol).

Why the higher ionization energy? Because each electron in the 1s orbital of helium now has two protons from the nucleus pulling on it instead of just one, which results in a stronger attractive force according to the Coulomb equation.

Note that it’s not exactly twice as much; we can rationalize the lower value as being due to repulsion between the two electrons in the 1s orbital.

6. The 2s Shell: Lithium and Beryllium

With the 1s orbital full, the third element (lithium)  must therefore have its electron placed in the 2s orbital, which is not only farther away from the nucleus, but also has the attractive force of the nucleus partially shielded by the intervening pair of electrons in the 1s orbital. This shielding leads the electron in the 2s orbital of lithium to only “feel” an effective nuclear charge of (3 – 2) = +1 from the nucleus.

Hence, this electron is particularly easy to rip off, requiring a mere 520 kJ/mol (compare to 2372 kJ/mol for helium!). Lithium metal will readily participate in chemical reactions; it will react slowly with water, for example.  Helium, on the other hand, has never been observed to combine with another element.

In contrast, the two electrons in the 1s shell of lithium never participate in reactions. We can call these chemically inert electrons the “inner shell” electrons, as opposed to the “outer shell” , or “valence” electron in the 2s orbital.

In the fourth element, beryllium, the 2s orbital becomes fully occupied with a pair of electrons of opposite spin. Note the increased ionization energy (+379 kJ/mol from lithium) as the electrons feel a greater attraction from the extra proton in the nucleus.

Also note that although beryllium has a filled 2s orbital,  in no way does it behave like a noble gas. Beryllium metal reacts readily with oxygen to form an oxide layer, for example.  Unlike the gap in energy between 1s and 2s, the gap in energy between the 2s orbital and the next-highest energy level (2p) orbital is relatively small, such that these orbitals, when filled, can together hold a combined “octet” of valence electrons.

With the 2s now full, additional electrons must now be placed in an even higher energy level, the 2p orbital.

Unlike the s orbitals, which can only hold two electrons apiece, each set of p orbitals can hold six. Our interpretation of this is that each level of p orbitals (2p, 3p, 4p, etc.) is comprised of three individual dumbbell-shaped p orbitals that are aligned at right angles to each other along the x, y, and z axes.

Here’s what the electronic configuration looks like for boron. (Note: we could also choose to label the three 2p orbitals as 2px, 2py, and 2pz, but for our purposes all of these orbitals are of equivalent energies and it serves no purpose to do so here).

Note how the ionization energy of boron is slightly lower (99 kJ/mol lower) than that of beryllium, from which we can interpret that the 2p orbital is slightly farther away from the nucleus than the 2s orbital. [Note 3].

8. A Sudden Dip At Oxygen

Then, at oxygen, there’s a sudden dip in the ionization energy (–89 kJ/mol):

Ever got on a bus to find out there are no remaining empty seats, and you have to (horrors!) sit next to a total stranger?

That’s essentially what’s happening here: with each of the 2p orbitals (px, py, pz) singly occupied, any additional electrons will have to pair up. That dip in ionization energy reflects greater electron-electron repulsion in a doubly occupied orbital, making the electron (slightly) easier to pull off.

9. The Electronic Configuration Of Fluorine

From oxygen to fluorine the ionization energy climbs again (+368 kJ/mol from oxygen):

And then, at neon we finally reach another local maximum of ionization energy (+399 kJ/mol from fluorine):

Here we have reached the maximum capacity of the 2s and 2p orbitals (acting together as an “octet”), where each electron in the octet will “feel” the maximum effective charge from the nucleus. In neon, each of the eight electrons in the valence “octet” itself feels a net force of +8 from the nucleus (ten protons in the nucleus minus two electrons in the intervening 1s shell)  and a certain amount of electron-electron repulsion in the filled 2s and 2p orbitals.

Neon is a local maximum where the Coulombic attractive term is maximized, and so is ionization energy.  This is what gives rise to the familar “octet rule”, where atoms are said to “seek out full octets” and so on.

Let’s just go one atom further to illustrate the dramatic difference in behaviour between sodium and neon.

The ionization energy of sodium is a meagre 496 kJ/mol, which is 1584 kJ/mol less than neon. Sodium gives up its valence electron readily, reacting even with water (violently!); in contrast, no other element has ever been observed to combine with neon.

We’re going to stop at this point, but you can imagine where it goes from here. [Note 4]

12. Endnote: A Puzzle. What About A Simple Molecule Like CH4?

Instead, here’s what’s been observed about methane:

What gives? How can this possibly be true, given what we now know about the s and p orbitals? How can we explain this situation where the distinctions between the 2s and 2p orbitals have been completely wiped out?

So what’s going on? We’ll talk about that in the next post.

Note 1: Nor did he (or anyone else in 1913) imagine the sublimely funky shapes of the p, d and f orbitals. The wonders of nature can surpass the most fanciful human imagination.

Note 3: although the electrons in the 2s and 2p orbitals mix and hybridize (as we’ll see) the electrons in the 2s orbital are closer to the nucleus, which can affect certain chemical properties. For example the unusually strong acidity of alkyne C-H bonds (pKa = 25) relative to alkanes (pKa = 50) can be rationalized by noting that the sp-hybridized orbital are closer to the nucleus (50% s-character) and thus more stable, relative to the pair of electrons in the sp3-hybridized orbital of an alkyl anion (25% s-character) which are farther away.

3 thoughts on “Review of Atomic Orbitals for Organic Chemistry”