So far with reactions of alkenes, we’ve gone through the “carbocation pathway” and the “3 membered ring” pathway. Today, let’s finish with the third major pathway: the “concerted” pathway.

Certain reactions with alkenes go through a mechanism where the addition happens in one step. Since everything is happening at once, this is often referred to as a “concerted” reaction mechanism.

These reactions often occur through cyclic transition states where both atoms are being delivered to the same side of the alkene at the same time.

For the most part, the two atoms being delivered to the alkene are identical, so we don’t worry about the issue of “Markovnikoff vs. anti-Markovnikoff”. It makes sense when you think about it: for instance, if we’re forming two C-H bonds, it’s not possible to form “regioisomers”.

Note here that in all cases that the two hydrogens are added to the same side of the alkene – so the stereochemistry is “syn”.

Reactions in this category include: 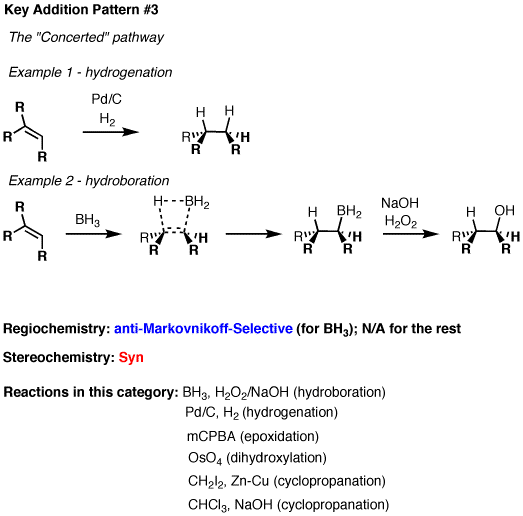 If you take these three categories together, you’ve organized at least 15 different reactions of alkenes into 3 different buckets. It’s a heck of a lot easier to keep track of 3 categories than it is to remember 15 different ones.

P. P. S. Are there exceptions? There is one, and I won’t have time to talk about it. If you take hydrobromic acid (HBr) in the presence of peroxides, it will add anti-Markovnikoff with “random” stereochemistry. This is the “free-radical” pathway, a fourth (and very minor) pattern in alkene additions.