Let’s talk about the second key pattern for alkene addition reactions today. I don’t claim to have a snazzy name for it, although one of my first students always called reactions that went through this pathway “the three ring circus”.

Some additions to alkenes don’t go through a free carbocation. Instead, alkenes react with them to form 3-membered rings with a positive charge as an intermediate.

One example is halogens, like Cl2 and Br2. Add Br2 to an alkene, and you end up with formation of a 3 membered ring with a positive charge on the bromine. This is called a “bromonium” ion. (Similarly, the one with chlorine is called “chloronium”, iodine is “iodonium”, and so on. Carbocations tend to be “iums”)

Once you form the bromonium ion, the nucleophile [Br(-) in this case] then comes back and attacks one of the carbons, breaking open the 3 membered ring.

It turns out that the carbon it attacks is not random. Opposite charges attract – and the nucleophile will attack the carbon with the greatest amount of positive charge (not the bromine! formal charge is misleading here). This happens to be thecarbon which can best stabilize partial positive charge. In other words, the nucleophile attacks the most substituted carbon of the alkene.

Put yet another way, these additions follow Markovnikoff’s rule. In most cases this won’t matter. Exception below.

Since we’re not dealing with a free carbocation, the stereochemistry of these reactions is also important. The nucleophile HAS to attack the backside of the carbon-bromine bond (just like an SN2). This means that we get inversion at this carbon.

Bottom line: this pathway gives us products with anti stereochemistry. The two bonds we are forming add to opposite sides of what used to be the alkene.

There are quite a few reactions that follow this pathway. They are Cl2, Br2, I2, as well as all the reactions that involve these halogens in the presence of a nucleophilic solvent such as water or alcohols (e.g. Br2/H2O). It also applies to the reaction of  alkenes with Hg(OAc)2 and water (or alcohols) followed by NaBH4.** Finally, if you end up talking about this, you can apply this same pattern to reactions that open epoxides under acidic conditions. 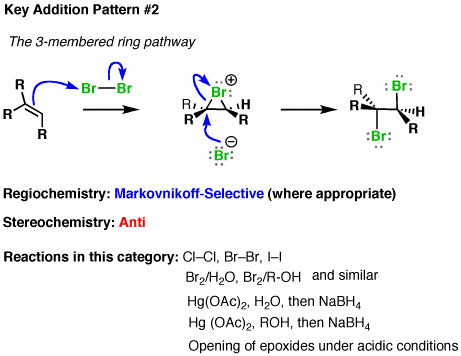 Here’s an example where the reaction shows its selectivity for the Markovnikoff product: formation of halohydrins using Br2/H2O.

Next – the third major pathway.

Thanks for reading!  James

P.S. The reaction of alkenes with Hg(OAc)2 and water followed by NaBH4 is initially “anti”, but NaBH4 removes the Hg in a way that randomizes the stereochemistry (i.e. it goes through a free radical on carbon). More details here.

The reaction is Markovnikoff however, as we’d expect.