Back in organic chemistry 1 you learned a bit about carbocations.

For the next week or so, the *stability* of carbocations is going to be REALLY important.

Today we’re going to fill in a bit more of the picture.

First of all, the key point: carbocations are electron poor.

“When you’re poor, it’s good to have rich neighbors”. So if a carbocation is next to a group that can *give* it electrons, it takes ’em. This helps to stabilize it. By the opposite token, a carbocation that is next to an electron withdrawing group is going to be even more electron poor – and more unstable!
Let’s look at these 5 carbocations. 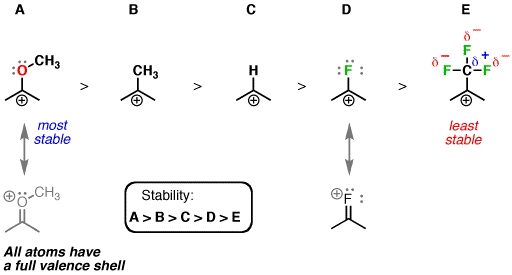 This is really important stuff! Next we’ll see how to apply this to figure out important trends in reactions of aromatic compounds.