Let’s talk about carbocations today. This is going to be really important going forward.

Carbocations are unhappy species. Why? Because they’re electron-poor: they have less than a full octet of electrons.

So how do we cheer a poor carbocation up?

If you’re poor, it helps to have rich neighbors.

So carbocations are stabilized by adjacent groups that can donate electron density. The most common example you learn in Org 1 is alkyl groups. Alkyl groups are electron donating, since they have C-H bonds that can end up donating electrons to the adjacent carbocation.

For this reason, carbocation stability increases as we go from primary to secondary to tertiary.

[There’s a second situation that you generally don’t encounter until Org 2, but carbocations are also stabilized by adjacent atoms that have lone pairs. Even an atom like oxygen, which we normally think of as electron withdrawing, can stabilize a carbocation –  since it can donate a pair of electrons to carbon, giving it a full octet. This is called Pi-donation.]
Spreading out the charge
The second way carbocations are stabilized is through resonance. Charge is stabilized by distributing it over a larger area (making it more diffuse).

Resonance helps to “spread out” the charge between multiple sites, which is going to decrease the charge density on the carbon. The effect on stability of the carbocation is tremendous.  For this reason, the “allyl carbocation” is more stable than a normal secondary carbocation, even though it is technically “primary”.
Here’s a summary: 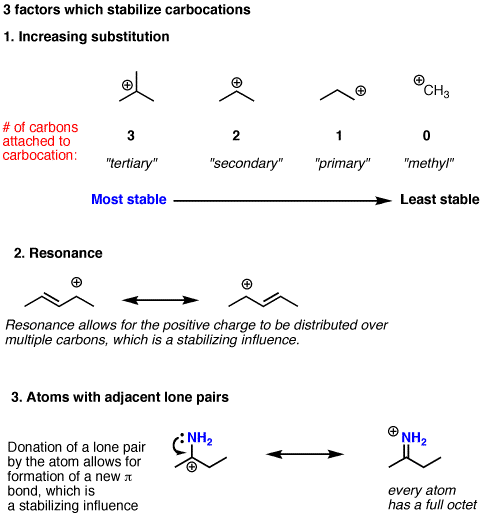 It can also help to ask the opposite question. How do we destabilize a carbocation? Well, we can make it less stable if we take electrons away. So adjacent electron-withdrawing groups destabilize carbocations. So does making the charge more concentrated.