Epoxides are cyclic ethers with a lot of ring strain (since they’re 3 membered rings – interior angle of 60 degrees instead of the ideal 109 degrees). So opening of epoxides is a very favorable reaction. Ring-opening reactions of epoxides can be a little bit confusing to some students because the patterns change depending on conditions.  Thankfully, once you see the pattern, identifying which pattern to apply is fairly straightforward. What’s better, these are patterns you’ve already learned in Org 1.

There are two ways to open epoxides:  under acidic conditions or under basic conditions. And the conditions used will affect the products that you get. 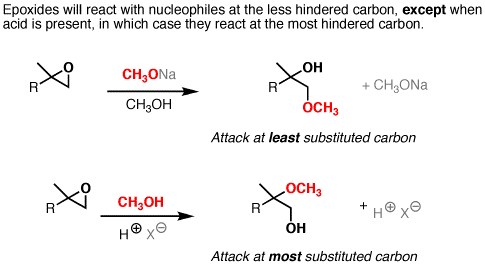 Last thing: if the nucleophilic attack occurs on a stereocenter, don’t forget that you’re going to have inversion of stereochemistry at that carbon.

Tomorrow: The single best contribution of France to organic chemistry – the Grignard reaction.
Thanks for reading! James