Last time I said that it’s hard to *usefully* build amines through the SN2 reaction, because once amines start reacting, they don’t stop until they form (pretty useless) ammonium salts.

However, today’s note is about a clever workaround to this. It’s called the “Gabriel Synthesis”.

In the Gabriel synthesis we take a molecule called “phthalimide”. It’s essentially a nitrogen flanked by two carbonyl groups. This means that the N-H bond is a lot more acidic than it normally would be, because the resulting anion will be resonance stabilized.

Once we make the anion with a strong base like NaH or NaNH2, the next step is to add an alkyl halide. The nitrogen nucleophile will then attack the alkyl halide, doing an SN2 reaction, and forming an N-C bond.

Here’s the cool thing: because the nitrogen is attached to the two electron withdrawing groups, it’s not nearly as nucleophilic as normal amines. So it stops there!

The third step is to liberate the amine! This is done through addition of NH2NH2 (hydrazine), which ends up adding to the carbonyl carbon, and through a sequence of steps, the amine ends up as the leaving group. 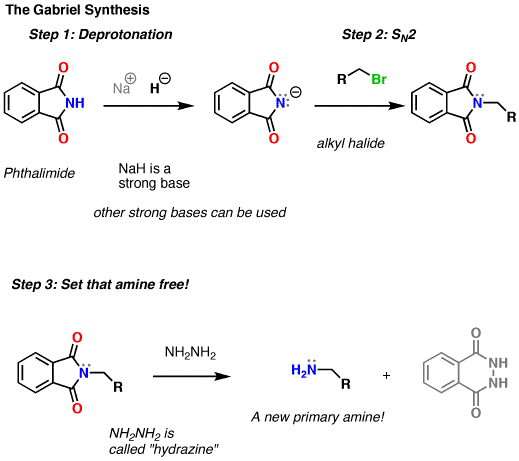 Bottom line: the Gabriel synthesis is a way to make all kinds of different amines. As long as they’re primary.

Tomorrow: how to make all the other (non-primary) amines.

Thanks for reading!  James