How Acidity and Basicity Are Related

See if you can spot the mistake in this common statement some students make.

Here’s one of the strongest acids, hydroiodic acid HI.

Here’s one of the weakest acids, butane.

Note that butane *can’t* be a base, because it doesn’t have a lone pair.

BUT… remove a proton from butane, turns it into its *conjugate base*. THEN IT IS A RAVENOUS BEAST, capable of removing of proton from any molecule nearby that is less acidic than butane – which is pretty much anything. This is like the scene in Clash of the Titans where Liam Neeson says, “Release The Kraken!”.

In contrast when you remove a proton from H–I, the reaction of the iodide ion is essentially  “meh”.  Iodide ion  I(-) is extremely stable by itself, due to its electronegativity and also its large size, which “spreads out” the negative charge.

The acidity of a compound reflects how stable its conjugate base is. 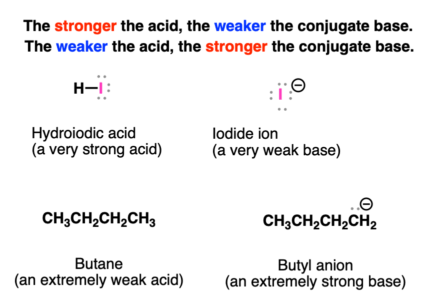 Tomorrow: The one key factor for understanding basicity.