In the next few weeks, you’re going to hear the words “proton transfer” a lot. What does it mean?

Well, proton transfer is exactly what it sounds like: one part of a molecule acts as an acid (loses a proton) and another part acts as a base (gains a proton). At the end of the day, a proton has moved from one part of the molecule to the other.

One nagging issue is: how do you show it happening? 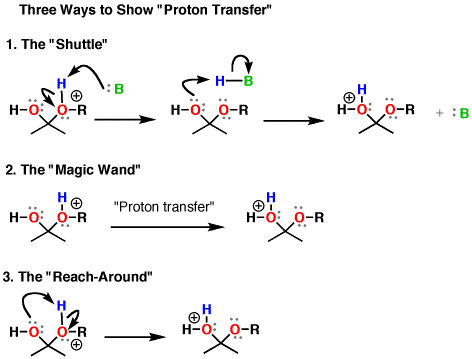 It’s not super-crucial how you show it, but it IS crucial that you know it. Because proton transfer is key for so many of the reactions you have already learned (imine formation, acetal formation) as well as many of those to come.

The thing is that in the next post we’ll talk about how these mechanistic steps we’ve been learning (addition, elimination, proton transfer…) are kind of like chords on a guitar. And once you know three chords, you can start to play a LOT of songs!