Today, let’s finish up a quick snapshot of how to break down a simple synthesis problem.

Last time I said that the process goes something like this:

The second step – identifying reactions – is really where the rubber meets the road with synthesis questions. There’s no way around it: you have to learn which reactions form and break certain bonds.

For the synthesis problem below, last time  we came up with the following possibilities

If we apply each of these reactions to the alkyne, we’ll get the following results. As you should be able to see, only two of them are potentially useful. The other ones won’t get us to our desired product in a reasonable number of steps. 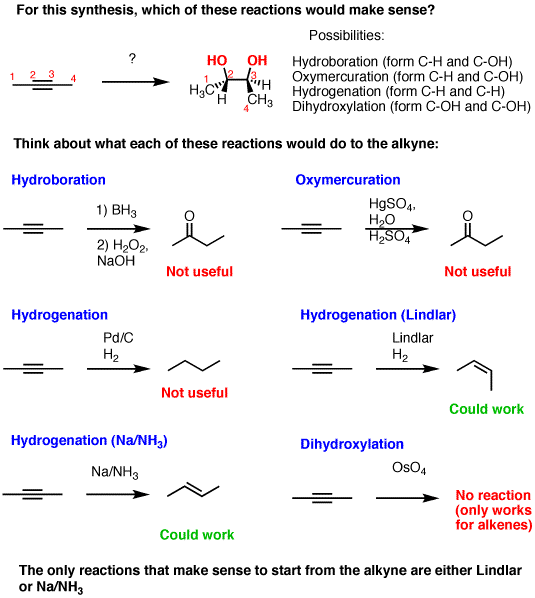 Looking at the results, it seems only that Lindlar and Na/NH3 are acceptable reactions to start on the alkyne.

Given that this is the case, let’s think about what the other reaction could be. If we’re hydrogenating, this will form two C-H bonds. So we’d need to form two C-OH bonds.

One way we know of forming two C-OH bonds is through dihydroxylation of alkenes with OsO4. This reaction proceeds in syn fashion, so working backwards, we would have to start with the following alkene (the trans). 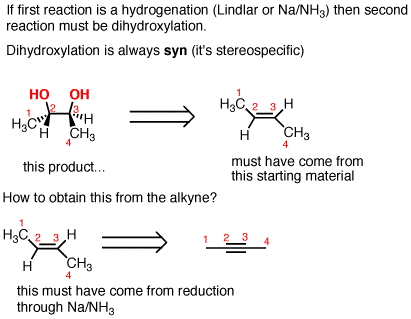 So let’s put it together now: two steps.

I realize that this might seem like a simple example. And it is, in the grand scheme of things.  But in order to get good at anything you have to start somewhere. And by recognizing the bonds that form and break and the reactions that can get you there, at least you’ll have a method. You can start whittling away at a tough synthesis problem bit by bit instead of staring at it forever, expecting to just “see it”.

P.S. Advanced readers only: Here, we did an “anti” hydrogenation followed by a “syn hydroxylation”. But did you notice that we could have obtained the same product through a syn reduction (Lindlar, H2) and an “anti”-dihydroxylation (mCPBA, followed by NaOH/H2O). Neat, huh?