OK, now that we’ve asked the first question about SN1/SN2/E1/E2, we need to ask the second question.

Here it is: Is the nucleophile strong or weak?

Remember that the rate-limiting step in the SN2 and E2 reactions involves both the nucleophile (base) and the alkyl halide, whereas the E1 and SN1 just require the alkyl halide (the leaving group leaves!)

So the E2 and SN2 reactions require “stronger” nucleophiles/bases than the SN1 and E1 reactions.

So what makes the difference between a strong nucleophile and a weak one?

Weak nucleophiles are neutral and don’t bear a charge. Some examples are CH3OH, H2O, and CH3SH. In this category I’d also put acids such as H2SO4 and HCl.

So let’s look at the 4 examples I started with yesterday. 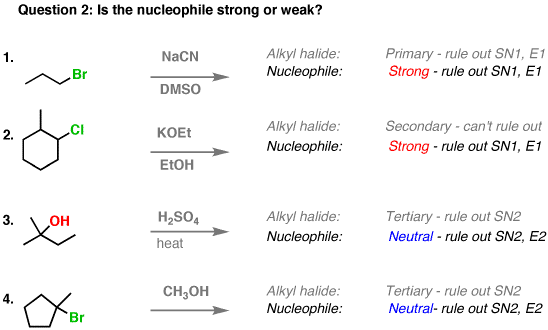 Example 1 uses NaCN (a strong nucleophile). We’ve already ruled out the SN1 and E1 here because it’s primary. As it turns out, NC(-) is quite a weak base, so the E2 won’t happen here either, but we’ll deal with that in the summary at the end of the week.

Example 2 uses KOEt (strong nucleophile). So we can rule out the SN1 and E1 here as well.

Example 3 uses H2SO4. So we can rule out the E2, in addition to the SN2 we ruled out earlier because it’s tertiary.

Already, for each of these 4 examples, we’ve got it down from 4 possibilities to 2. Tomorrow, we’ll look at the solvent, and winnow it down even more.