OK, now that we’ve discussed electrophilic aromatic substitution a bit and the influence of directing groups, here’s yet another question.

What do we do when there’s more than one group on a benzene?

Sometimes it’s fairly easy to figure this out. Let’s say you have an aromatic ring with CH3 and NO2 on it, arranged ortho to each other.

What if the two groups direct to different positions? In the second example below: 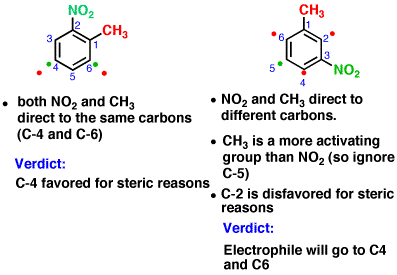 So there are really four questions to ask:

Tomorrow: what do electrophilic aromatic substitutions have in common with simple arithmetic questions?