One of the key functional groups to watch for when you look at sugars is hemiacetals.

Let’s review: just like a hemisphere is half a sphere, a hemiacetal is “half an acetal”.  Hemiacetals are formed when alcohols add to aldehydes or ketones. Look for a carbon that’s attached to two oxygens – one of them OH, and the other one O attached to an alkyl group (O-R).

Sugars four carbons and longer tend to “bite” in on themselves, like a snake biting its own tail. What this means is that a molecule that has both an OH and an aldehyde (or ketone) can have the OH add to the aldehyde (or ketone), forming acyclic hemiacetal.

This has two important consequences for sugars.

First, a phenomenon called “mutarotation”.  look at the configuration of glucose on the C-1 (hemiacetal) carbon below.  Notice something? 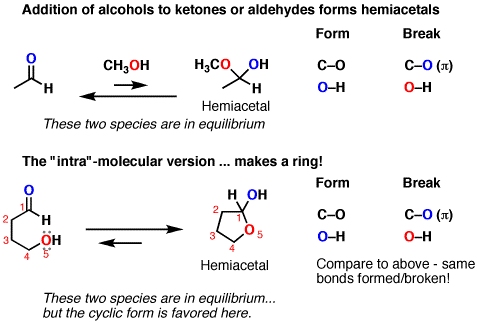 There’s something interesting about this stereocenter, however. If you take the molecule on the left (called “beta-glucose”) – more details on alpha and beta here– something interesting happens. After a period of time, if we examine the molecule in solution, we’ll find that something has changed. It’s not 100% in that configuration at C-1 anymore. For glucose, we’ll observe that after a while we get a mixture of about 64% of the “beta” form (on the left) and 36% of the “alpha” form (on the right).

What’s going on? Well, that ring is opening! And we form an aldehyde in the process, which (being flat) can then be attacked from two different directions, leading to the beta and alpha forms respectively.

This puzzled early organic chemists, because they’d observe that the optical rotation of a sugar would initially change with time, until reaching a stable value.  They gave this phenomenon the name “mutarotation”.

The second consequence of this equilibrium is the following.

Even though these sugars spend 99% of their time in the closed form, it’s still possible for reagents to react with the open-form aldehyde. 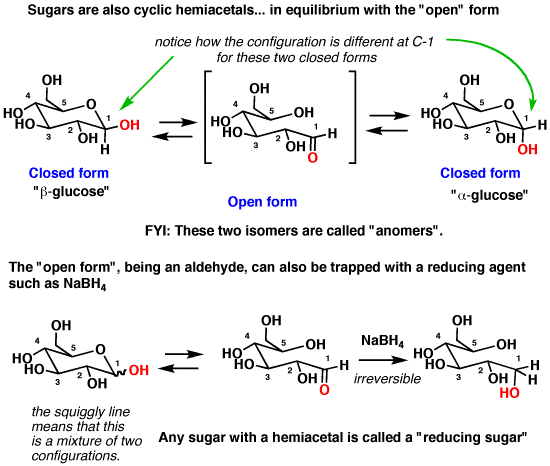 Think of a groundhog that spends 99% of its time underground, but has to come to the surface occasionally.  A patient hunter can just wait by the hole until the rodent shows itself – and then blast away.  Similarly, although a reducing agent like sodium borohydride (NaBH4) won’t react with a sugar in its closed form, as soon as the open form is created, blam! the reactive aldehyde is reduced to an alcohol.

Sugars with hemiacetals are called reducing sugars for that reason – they can be reduced to alcohols because they are in equilibrium with an open form.

On the other hand, sugars which do not contain hemiacetals (or aldehydes) will not be in equilibrium with their open form, are completely inert to sodium borohydride, These are not reducing sugars.

* Why is this? Remember from Org 1 that in the chair conformer of cyclohexane, all C-C bonds are perfectly staggered with respect to each other, so steric repulsions are minimized.