Remember what happens in the SN1 reaction?

Well, if you try running some SN1 reactions, you’ll see that they’re often accompanied by a little byproduct.

You also get  alkenes.

As we know by now, alkenes are the product of elimination reactions.

So what could be happening that’s leading to elimination?

Here’s the most likely possibility:

Just like the SN1, the rate of this reaction only depends on the concentration of the alkyl halide. So the rate is “unimolecular”.

We call this the E1 mechanism (elimination, unimolecular). Here’s an example. 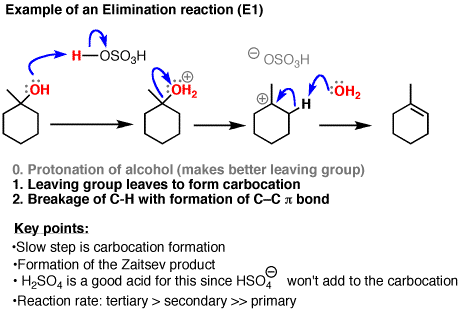 Here’s some other facts about the E1 reaction