I was out for a walk the other day and I saw 3 of the weirdest/ugliest looking cats I’d ever seen.Even weirder than Freaky Sawhorse cat.

Luckily I got pictures because nobody would believe me if I described them. They had two heads people. And their tails and feet were interchanged.

It’s hard to sneak up on two-headed cats, but I managed to get a picture of them from the side. I also gave them names.

Absolutely bizarre.  I don’t know what’s in the water here but something weird is going on. These are some screwed up cats.

Looking at Larry and Doug for the first time, they seem to be exactly the same. But if you map out a Newman projection, you should come to an interesting realization. These cats are also non-superimposable mirror images. Just like Freaky Sawhorse Cat and his mirror image, these are enantiocats. 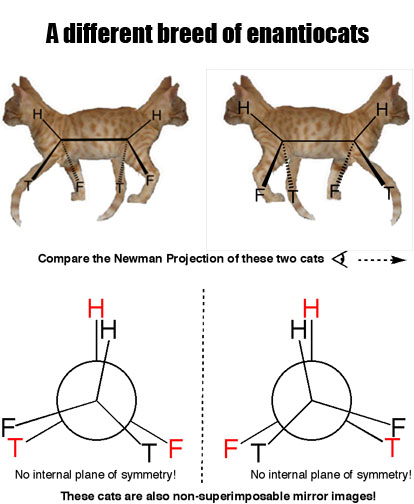 Alright, but if Larry and Doug are enantiocats, where does that leave Moe, in relation to Larry and Doug? He’s clearly related in some way. But how? He’s not a constitutional isocat, like we’ve met before: both his  front half and back half each have a head, tail, and foot attached, just like Larry and Doug. But he’s not an enantiocat either. Look at the Newman projection of Larry and Moe, side by side: 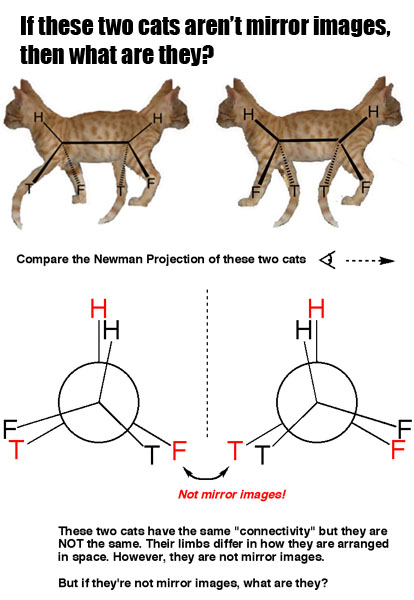 Moe and Larry differ in the arrangement of their limbs in space, but they are not mirror images (i.e. not enantiocats).

We need some names to describe these relationships.

I had to call my friend Walter again to give me some kind of Latin or Greek seal of approval on a name that will be appropriately hoity toity. He suggested I use the word “stereo” which he said means “solid” in Greek, but has been appropriated in many instances to refer to the “physicality” of a phenomenon. Sounded good to me.

So let’s define “stereoisocats” as “the same cat, with the same connectivity, but differ in how their limbs are arranged in space”.

So Larry, Doug, and Moe are all stereoisocats.

So we can recognize two types of stereo relationships. 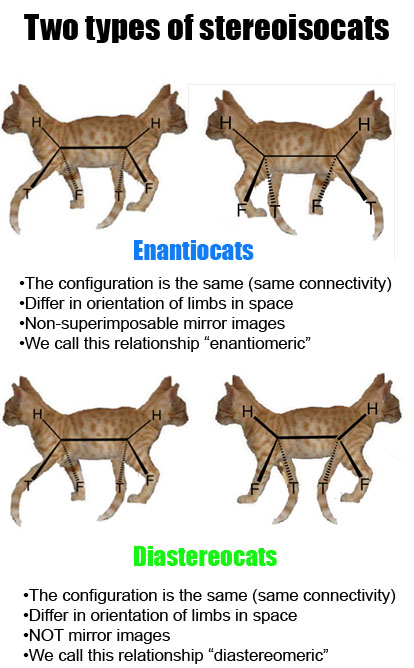 Curious, isn’t it? I never suspected cats could get so complicated.  I wonder why some cats can have an enantiocat and other cats can’t? This is something we’ll have to explore in more detail next time.