Now it might strike you as rather arbitrary that I chose to do the drawing from the side. You are right. In fact, depending on your point of view, you can depict a 3-dimensional cat in several different ways.

Here is a picture of three different cats that are all in the same conformation. The only thing that is different between these conformations is the angle we’ve chosen to depict it. 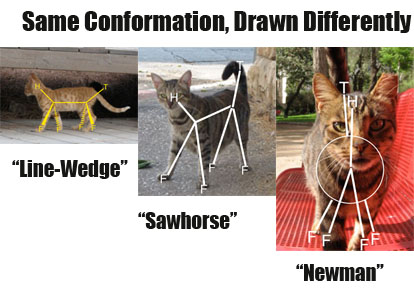 If we depict it from above and a little to the side, we have what we can refer to as a Sawhorse projection. I call it the Sawhorse because, well, it resembles one. Note how the lines and the substituents (H=head, T=tail, F=foot) clearly show the orientation.

Now, an alternative way to depict conformations is the front-on view. Here, you’ll note that the spine (the “central axis”) is hidden, as we are viewing the conformation from the front. (Note: this is arbitrary – I could also have depicted the same picture from the back, but  I’m not going to put up pictures of cat butts. That would be sick). Besides giving me an excuse to put even cuter pictures of cats on my blog, this depiction has some advantages, as we shall soon see. I call this the Newman projection since the cat in particular belongs to my neighbor Schlomo Newman, and he only allowed me to take pictures of it on the condition that I give him the intellectual property rights. I also had to buy him a kilo of very expensive hummus, but that’s another story.

The Newman projection is a particularly clever way to depict cat conformations, if I don’t say so myself. One of the main advantages is that it makes it very clear what the relative orientations of the feet, head, and tail in a given conformation are. 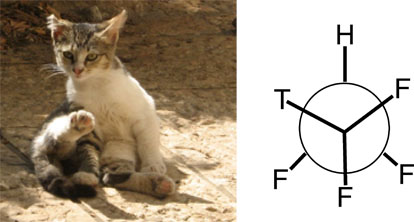 Let’s look at the two conformations side by side: 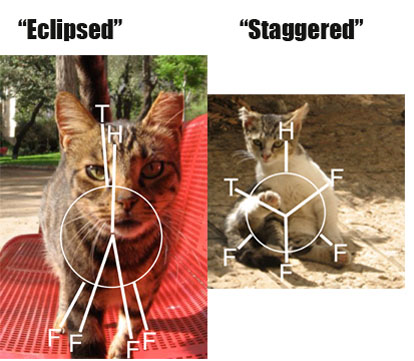 Note here the difference in the Newman projection of these two cats. The projection isn’t quite the same (one is from the front, and one is from the back) but they show a rotation about the central axis of 60 degrees. In the orientation on the left, each of the front feet are co-planar with the back feet, and the head is in the same plane as the tail. Since the parts on the front (the head and two feet) block out our view of the parts on the back (the tail and two feet) we can call this the eclipsed conformation.

One of the cool things about the Newman is that it makes drawing rotations a snap. It gives us another theoretical cat model that we can manipulate on a page without having to do it on the real thing. Schlomo insisted that I not attempt any “funny stuff” with his cat which I took to mean not rotating it around any weird angles. So we’ll just have to do it on paper without the aid of a cat photo.

In my opinion this makes rotations a bit easier to visualize than with the cat line diagram. But it’s still a valuable skill to learn how to convert the two. 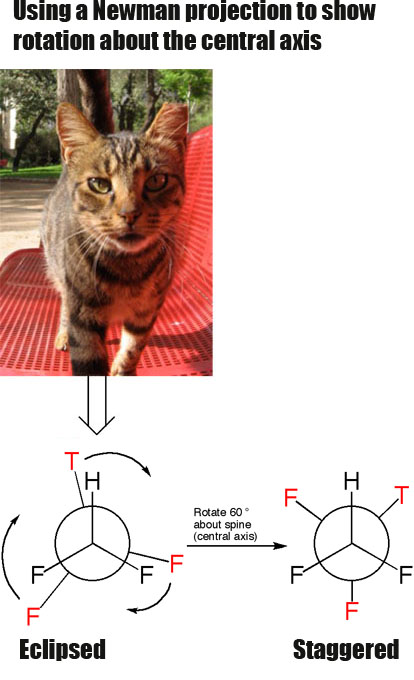 Now let’s get even more nerdy. If we take out a protractor we can actually measure some of the angles involved and start to gain a more qualitative understanding of the difference between these two orientations.

Let’s define an angle, the dihedral angle, as being the angle made by a substituent (i.e. head (H), tail (T), foot(F)) on the front half and one on the back half, as we gaze along the central axis (spine). We pick one substituent as a reference and then measure the angles from there. Let’s pick the head (H) as our reference here. 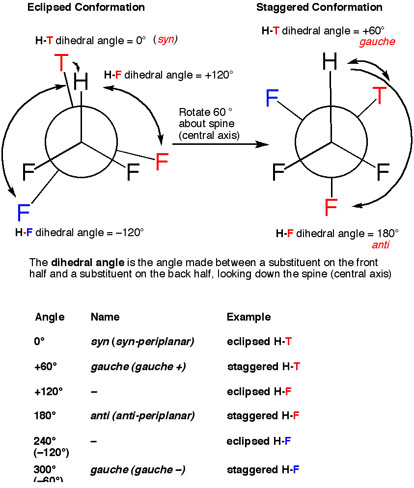 For instance in the eclipsed conformation above, the tail (T) and head (H) are in the same plane. They line up just like the minute and hour hands do at midnight: the dihedral angle here is 0°.  Since they’re on the Same Side, let’s call that Syn. The next dihedral angles to examine in the eclipsed conformation are the ones between the head and the two feet: they are +120° and -120° respectively.

Now let’s look at the staggered conformation. Here, the angle between the head and tail is 60 degrees clockwise (+60°). Since this is a little off-kilter, kind of like wearing a chartreuse blouse with a pink skirt, let’s give it a weird, tacky and nonsensical name – like “gauche”. The orientation between the head and foot here is –60° (or +240° if you like). This is also “gauche”. Finally, let’s look at the head (H) and the other foot (F) here; they have a dihedral angle of 180°. Since they’re on opposite sides, I might want to call them just “opposite” but let’s continue with some esoteric terminology and call this conformation “anti”.

So with this terminology we can start to give names to many of the weird conformations you’ll see cats adopt. We can use either wedge-line, sawhorse, or Newman projections to show cat conformations and each of these names applies, no matter how we draw them. Like this. 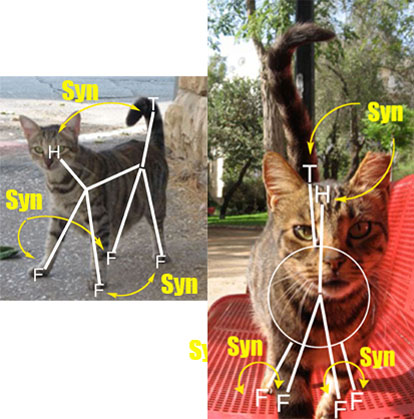 Final test for your cat terminology: application. Try this the next time you are at home.

Roommate: Dude what is up with your cat?

You: Ginger is clearly hungry. She’s in the eclipsed conformation and her head and tail are syn-periplanar.