Home / The Power of Laziness

The Power of Laziness

What would you do to save 5 seconds?

Let’s say it takes 10 minutes to walk from the gym to class.  Would it matter much to you if it took 10 minutes and 5 seconds instead of 10 minutes?

This is on the way from my campus gym to the local chemistry building. 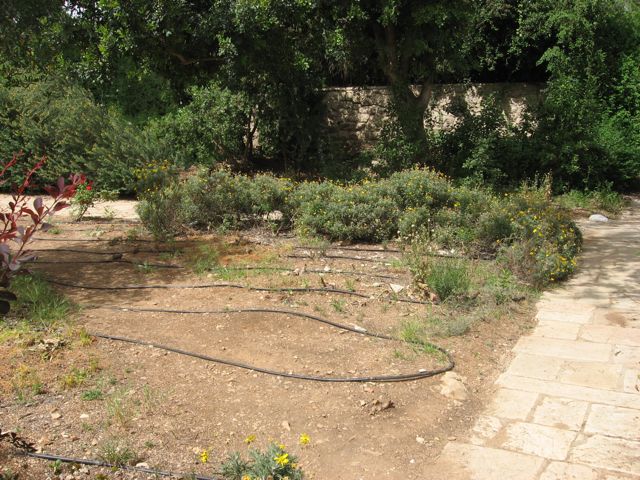 When they’re alone (or think they are alone) most individuals take the shortcut,  myself included (unless I’m with my wife, who tsk-tsks me for taking the shortcut and is one of the conscientious few who walks the long way even when nobody’s looking).  Groups take the shortcut too – it’s easier in a group, that way there’s more of you if a stranger tsk-tsks you for veering off the path.

I’m nerdy, so I counted this. It’s 19 steps total to walk on the path. It’s 12 steps to take the shortcut. 7 steps is about 5 seconds – taking the shortcut is 5 seconds faster.

Ask those people later, “does it matter to you whether you arrive 5 seconds faster?” and 100% will say no. We say no afterwards because in the abstract, 5 seconds is nothing. But in the present, we care a lot. 5 seconds is a big deal!  Why take the longer route.  What’s the payoff of exerting extra effort?

Now think about how people would act if they could save 30 seconds, or 10 minutes, or an hour.  Busy people – your professor, your TA, you. Given the choice to omit unnecessary effort with negligible cost, we will do so. We seek the path of least action.

Never underestimate the power of laziness.

You have to learn the shortcuts.

Chemical notation is full of shorthand. If you had to draw out the full structures of molecules every single time, by the end of the course you would go so crazy you would want to douse yourself in honey and lie down on a colony of fire ants.  Your instructors feel the same way. On my drawing program (ChemDraw) I recorded the amount of time it took to draw the “long” version and the “shortcut” version.

Guess which ones your textbooks and instructor are going to use? 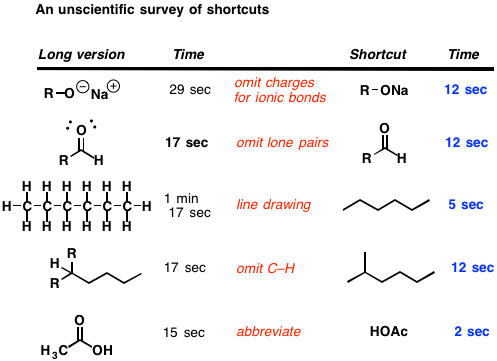 There’s no way around it – you have to learn the meaning of abbreviations such as Ph, Bn, Ts,  Ac, Me, Et, Pr, Bu, t-Bu and so on – in addition to knowing when one can use the  mysterious “R”. After the first few weeks, your instructors aren’t going to bother writing out everything longhand – invest the short amount of time necessary to know what these mean.

Recognizing “hidden” hydrogens and lone pairs is an acquired skill.

In line notation, the C-H bonds and lone pairs might not be drawn, but they’re still there. In the beginning, if it helps to draw out the C-H bonds and lone pairs where necessary do so. But like training wheels, if you practice enough, you’ll eventually grow of having to do this practice. Try to get to this stage as fast as possible, it’s relatively simple and will free your time for material later in the course.

6 thoughts on “The Power of Laziness”