In a blatant plug for the Reagent Guide, each Friday  I profile a different reagent that is commonly encountered in Org 1/ Org 2. Version 1.2 just got released last week, with a host of corrections and a new page index. 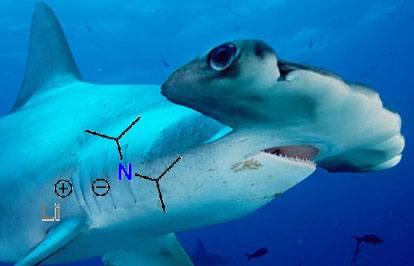 If NaNH2 is a piranha, then today’s reagent – lithium diisopropylamide (LDA) is like a hammerhead shark. It’s also got a powerful bite, but that distinctive proboscis can get in the way. So LDA can’t reach into tight spaces the same way that NaNH2 can.

In other words: LDA is a strong, bulky base. The most common use of LDA is in the formation of enolates. In the example below, notice how both carbons flanking the C=O have C-H bonds? LDA will remove the proton selectively from the carbon substituted with the fewest number of carbons:

Also note the temperature (–78 °C). There’s nothing special about –78° relative to –72° or –60° for this to work – it’s just that cold temperatures improve the selectivity, and –78°C happens to be the temperature of a very cheaply prepared cold bath (dry ice and acetone). A common solvent for this is tetrahydrofuran (THF).

Why is LDA useful? Well, enolates are extremely useful nucleophiles, able to participate in SN2 reactions with alkyl halides as well as the aldol reaction (among many other things). If we used NaNH2 to form an enolate like this, we’d likely get a mixture of two enolates, which would lead to a mixture of products. The selectivity of LDA in forming the less substituted enolate makes it extremely useful.

Although less common, LDA can also be used for the formation of “Hoffman” products in elimination reactions. The usual base for this is potassium t-butoxide, but LDA can do it too:

This diagram below shows the reaction between LDA and the ketone. Note the bonds that are forming (N-H, C-C) and the bonds that are breaking (C–H, C–O). The enolate that is formed has a resonance isomer where the negative charge is on the carbon. This is, in some respects, the more “important” resonance form, as it is the carbon that tends to be a better nucleophile than oxygen in reactions of enolates.

P.S. You can read about the chemistry of LDA and more than 80 other reagents in undergraduate organic chemistry in the “Organic Chemistry Reagent Guide”, available here as a downloadable PDF.