At some point you might have to ask yourself: what’s a conjugated system?

A conjugated system is a system of connected p orbitals.

Any time there’s a group of three or more adjacent p orbitals that can all line up in the same plane, this is a conjugated system (or pi system). It’s a little bit like a pi bond, but extended over more than two carbons – kind of like a row of men on a foosball table. Conjugation is a stabilizing effect: electrons can spread themselves out over a larger area, which results in a lowering of energy.

What can be part of a conjugated system? Any atom that is capable of donating a p orbital. This includes:

A short cut to figure out if it’s conjugated: ask yourself – can you draw a resonance form that puts a pi bond on that atom? If so, then it can be part of the conjugated system.

Here are four examples of conjugated systems (and one that is not!) 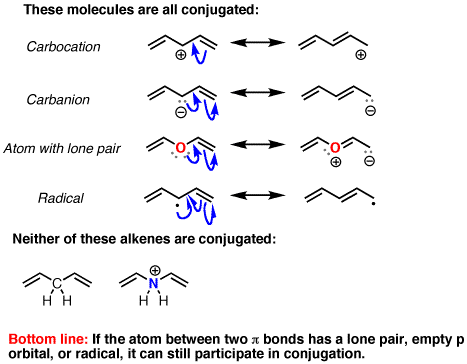 Tomorrow: let’s take a pause to summarize the week’s new concepts.
Thanks for reading! James