Let’s talk about amines today. Although you might not know it, you’re probably already familiar with them. They’re often found in many over the counter medications (as well as some that aren’t available in a drug store). Also, they make up some of the most notorious smells you’ll encounter. From personal experience, I can tell you that “cadaverine” and “putrescine” smell exactly what they sound like.

You’ll know an amine by the surname “-ine”. Do these names sound familiar?

Amines are classified as primary, secondary, or tertiary depending on how many alkyl groups they are attached to. (The case where nitrogen is attached to zero alkyl groups – NH3 – is called “ammonia”)

Amines are bases – they have a lone pair on the nitrogen, which can accept a proton from acids. As far as basicity goes, amines are stronger bases than alcohols. Nitrogen, being less electronegative than oxygen, holds its pair of electrons less tightly.  Nitrogen in its protonated form is called “ammonium”.

Amines are also nucleophiles – they will react with carbons bearing a partially positive charge, such as alkyl halides and carbonyl carbons. 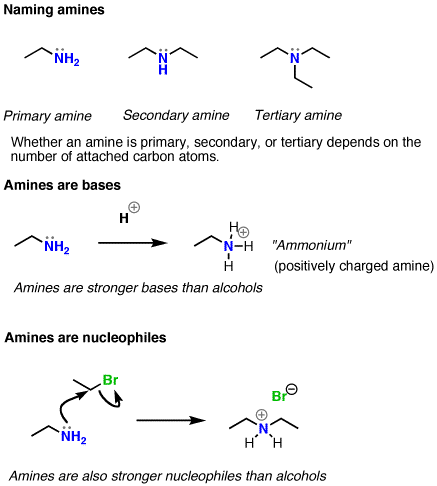 Tomorrow we’ll focus on that key aspect and talk about one of the key reactions of amines.