So what’s the most useful way to make amines?

Hint: It doesn’t involve the SN2. That can lead to problems such as “over”-alkylation, which gives us (fairly useless) ammonium salts.

The Gabriel synthesis is OK, but it only makes primary amines.

The most useful way to make amines by far, is called “Reductive amination”.

This is just a fancy way of saying that we do two things. 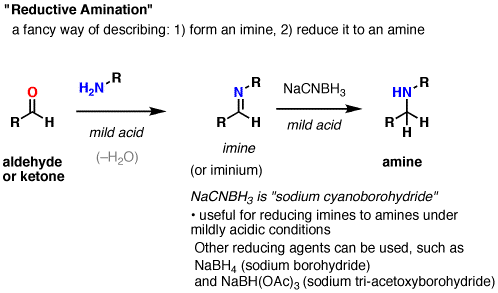 What makes this such a useful process is that imines are widely accessible from all different types of aldehydes and ketones.

Another neat part about this reaction is that we don’t actually need to isolate the imine in order to reduce it. We can do the whole process in one reaction flask. This means that as soon as the imine is formed, it is attacked by the reducing agent, generating the amine.

In order to do this, the reducing agent has to be stable to the mildly acidic conditions that we use to form imines. Thankfully, there are a number of reducing agents that are effective for this. The most common ones are:

Bottom line: all kinds of amines can be formed this way. The image below gives some examples. 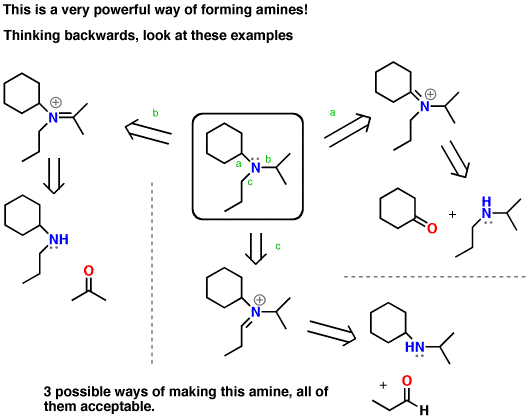 This next part is a little more advanced. You can skip it if you want.

Under the slightly acidic condtions we use to form imines (remember – their formation goes through the P A P E D mechanism) the imine will be protonated to give its conjugate acid, called an “iminium”. Iminiums are better electrophiles than imines (“the conjugate acid is always a better electrophile”) and the rate of reduction will be increased under these conditions.

You might remember that primary amines added to aldehydes/ketones give imines, but secondary amines give enamines. That’s because the last step in formation of enamines involved deprotonation – and since there were no hydrogens on the nitrogen, we had to deprotonate the alpha carbon to get there.

Well, here we don’t need to deprotonate for the last step. We’re reacting the reducing agent with the iminium! So the process still works for primary and secondary amines.

Tertiary amines, however, are a total bust. They still can’t be used here, since we can’t form imines/iminiums from them.


Tomorrow: a mish-mash of amine reactions