A few weeks ago I said resonance was the key theme of Org 2. It’s probably a good idea at this time to go back and refresh on one of the key skills you’ll need to master for this part of the course: drawing curved resonance arrows.

Curved arrows are how we show the movement of electrons. They’re one of the two key accounting tools for organic chemistry (the other being formal charge). 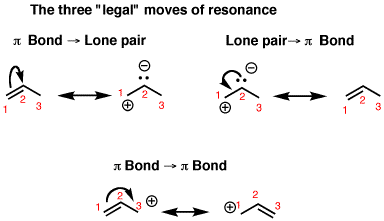 Every resonance structure of a molecule can be built through a combination of these three moves. Every. Single. One.

Thanks for reading! James
PS One last thing to note. Curved arrows also tell you how to change formal charge.  Since electrons are moving from the tail to the head, the tail is donating electrons and the head is accepting electrons. You want to make the formal charge at the tail more positive by one (since it’s losing a negatively charged electron) and make the formal charge at the head more negative by one (since it’s adding a negatively charged electron).
PPS Further reading: In Summary – Resonance
PPPS Common Resonance Mistakes