Imagine I’ve got a pet cat, “Whitey” – a totally albino cat, completely devoid of other colors. If I put Whitey in front of a mirror, I will see his mirror image reflected there. And since Whitey is completely symmetrical in his coloring, I think you’d agree that we’d have a hard time distinguishing Whitey and his mirror image. In fact, for our purposes, they are the same.

However, if you took out a can of red paint and bravely put a dollop on Whitey’s front right (FR) forepaw, something interesting happens when you look in the mirror. Whitey’s mirror image appears to have a dollop of red paint on his  front left paw (FL). So he’s no longer superimposable on his mirror image!

What does this have to do with chemistry?

In chemistry, two molecules that are superimposable on their mirror images (like original Whitey) are the same molecule. They have exactly the same properties in every way.

Now – it’s also possible to have molecules which are mirror images of each other, but those mirror images are not superimposable, like Whitey (FR) and Whitey (FL) These molecules are not exactly the same. We have a name to describe them – they’re called enantiomers. They have identical physical properties, except for how they interact with polarized light  (that’s another story).

It’s important to realize that to call molecules “enantiomers” implies that we’re analyzing the relationship between two molecules.

These cats are certainly not superimposable, and they are no longer mirror images of each other. But they’re clearly closely related.

In chemistry there’s a different word we have for molecules that are stereoisomers but not mirror images. These are called diastereomers. Unlike enantiomers, these molecules have different physical properties (like boiling points, melting points, etc.).

I should just stop here! A picture says a thousand words. 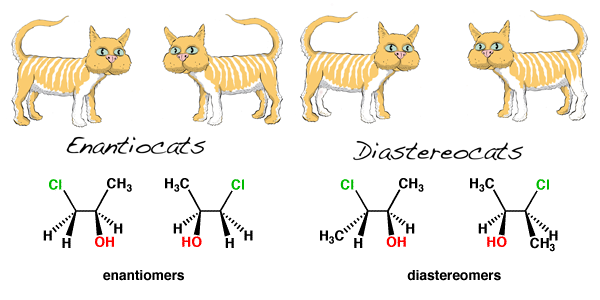 Tomorrow – a handy little trick for how to draw the enantiomer of any molecule.

P.S. Everything I learned about stereochemistry I learned from cats.