Here’s another little snippet from Org 1 that just keeps coming back in spades in Org 2:

“the conjugate base is always a better nucleophile”.

I said enols were good nucleophiles. But their conjugate bases – enolates – are even better.

Here’s how you make ’em.

Take a ketone (or aldehyde, or ester…) and add a strong base, like hydroxide HO(-) or alkoxide RO(-)

This will break the C-H bond on the carbon next to the carbonyl (C=O).  Normally, C-H bonds aren’t very acidic! But because the negative charge that forms is resonance stabilized, it’s a lot more stable than it typically would be.

We call this an enolate.

Enolates have two resonance forms – we can put the negative charge on the oxygen or the carbon.

As it turns out, it’s much more important to put the negative charge on the carbon. You can think of this resonance form as being more “reactive” (I put that “reactive” in quotes because these two molecules aren’t interconverting – the “true” structure of the molecule is a “hybrid” of these two structures. For the purposes of reactivity, the molecule behaves as if the left hand resonance structure is more “reactive”]

When we have a simple ketone (like dimethyl ketone, above!) it’s easy – it doesn’t matter which carbon we take the hydrogen from.

BUT…. what happens if we use an unsymmetrical ketone like methyl ethyl ketone and treat it with base?

Turns out that for practical purpoes, it’s not very useful. Why not? Because we can deprotonate either carbon, and this will lead to mixtures. Mixtures = bad! We want to obtain only one product whenever possible.

There is a way around this, though: we can use a strong bulky base, and this will irreversibly remove a proton from the less substituted carbon. (Less substituted, because the bulky base, like a giant angry Sumo wrestler, can’t fit into tight spaces). 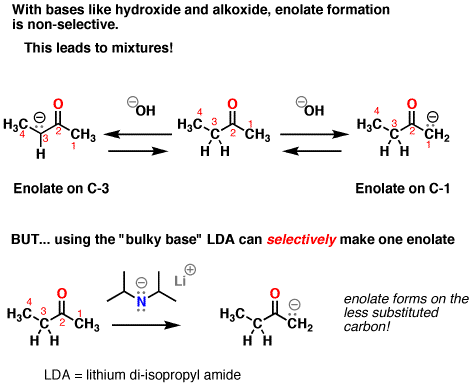 Our bulky base of choice is called lithium di-isopropyl amide (LDA). Being a strong base, it will only remove the proton from the less hindered carbon (C-1, above)

As we’ll see, enolates are really useful, especially in reactions like the aldol reaction, conjugate addition (“Michael reaction”) and the Claisen condensation.
Thanks for reading! James