Of all the reactions in organic chemistry 1, the ones that give students the most trouble are probably rearrangement reactions. Since I already talked about that, I should also talk about the second most problematic reaction: hydroboration.

Hydroboration – or to be more complete, hydroboration-oxidation – where we addhydrogen and boron to an alkene. It’s notable because it’s the most prominent “exception” in alkene addition reactions.

It’s the reaction that goes “anti-Markovnikoff”. After we add BH3, addition of hydrogen peroxide (H2O2) and a base (usually NaOH) results in formation of an alcohol at the least substituted carbon of the alkene.

It might help to understand “why” hydroboration is weird. Because when you look into it, it’s not really such an exception at all. It actually makes sense.

First of all, let’s quickly review why the addition of an acid like H-Br is “Markovnikoff” in the first place. Bromine, being more electronegative than hydrogen (3.0 vs. 2.2)  polarizes the H-Br bond so that the H is partially positive (electrophilic). So the alkene (nucleophile) ends up attacking the hydrogen (electrophile), leading to formation of a carbocation at the most stable position (i.e. the most substituted), which is then attacked by bromine. 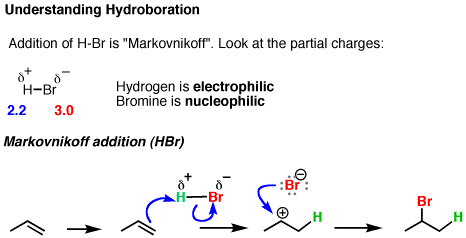 The polarization of the bonds in BH3 actually goes the other way. The electronegativity of H is 2.2 and that of boron is 2.0. So in this case it’s boronthat’s partially positive (electrophilic) and hydrogen that’s partially negative (nucleophilic). So the alkene (nucleophile) will attack the boron (electrophile) so as to put positive charge on the most stable position (i.e. the most substituted) which forms a bond with the hydrogen.

It’s the same principle! The less substituted end of the alkene becomes attached to the electrophile.

One key difference here is that it doesn’t go through a carbocation. Instead, everything happens at once: the B-H and C-C Pi bonds break, and the C-H and C-B bonds form.

When drawing the mechanism, it might help to draw the ugly version first. Worry about making it look pretty later.

Tomorrow – let’s think about how to look at reactions backwards.
Thanks for reading! James

P.S. To see the hydroboration reaction in step-by-step detail, here’s its entry in the Reaction Guide. 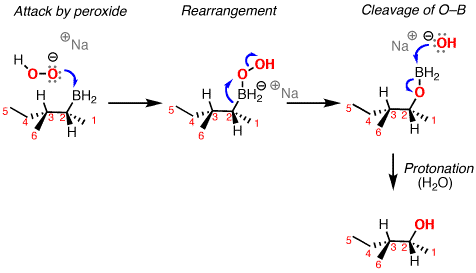