More On The E2

So like I said in a previous post, the “stereochemistry” of the E2 reaction is “anti”. That means that whenever were doing an elimination through the E2 pathway, the hydrogen we’re removing is anti (180 degrees) to the orientation of the leaving group.

So what does that actually mean? Let’s look at a concrete example: cyclohexane rings.

As you know, groups attached to a cyclohexane ring can exist in one of two positions: the axial position (in which it points straight up or down) or in the equatorial position (where it points “somewhat up” or “somewhat down”)..

Look at bromine when it’s in the equatorial position, below. What do you notice? (hint: look at the red bonds)

No matter what, there’s no way a hydrogen can align itself “anti” to the C-Br bond.Therefore elimination cannot occur.

Compare that to the situation where Br is axial. In this case, we see that there are two C-H bonds that are “anti” to the C-Br bond, and therefore elimination can occur here.

That’s the first big lesson here. Eliminations on a cyclohexane can only occur when the leaving group is axial.

Look at this molecule: trans-1-bromo-2-methylcyclohexane. What elimination reactions can it undergo? 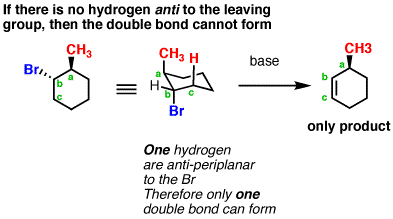 Well, first, we draw it in a chair so that the bromine is axial.

Now let’s look at the possibilities.

[The “short cut” for figuring this out without drawing the chair, would be to notice that Br is a dash, and then EXAMINE carbon A and carbon C for a hydrogen that would be a wedge. Since we see that there is a “wedge” CH3 on carbon A, we rule out forming the alkene here.]

I can pretty much guarantee you’ll be asked to answer a question like this at some point. The E2 reaction is one of the most testable reactions you’ll learn. It incorporates so many components of all the concepts we’ve learned already. Learn it well…. and practice!