Now that we’ve gone through a 4 step sequence for simplifying the process of deciding whether a reaction will be SN1/SN2/E!/E2, it’s worth going into detail into how it’s been oversimplified a bit.

The “four questions” approach is a good framework to start with. It works about 80-90% of the time. However, there are some spaces where things fall through.

The most important exception to know is that the framework doesn’t discern between “strong” (i.e. charged) nucleophiles and strong bases.

We measure “nucleophilicity” by the rate of a species’ reaction with an alkyl halide (or other electrophilic carbon). We measure “basicity” by the position of the acid-base equilibrium for that species. (If that sounds complicated, by this I just mean:  “pKa”).

Some species are actually pretty good nucleophiles, but they’re not very good bases.
So we can add a qualifier to make things more clear. In practice, only the conjugate bases of species with pKa’s above 12 or so are competently able to perform elimination reactions. 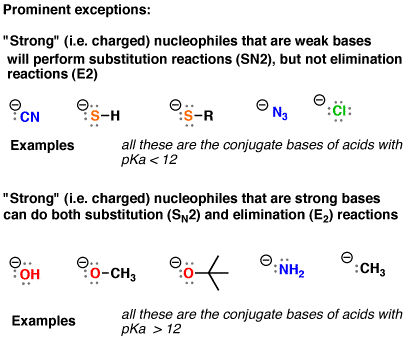 Another prominent exception: the reaction of primary alcohols with strong acids such as HCl goes through an SN2 process. The first thing that happens here is protonation of the alcohol, followed by attack of Cl(-) on the carbon. Unlike secondary and tertiary alcohols, with primary alcohols we don’t get dissociation to give the carbocation, since primary carbocations are really unstable.

It’s impossible to go through every possible exception, of course.  In my opinion, the best way to make yourself “bulletproof” on problems like this is to do as many practice problems on the SN1/SN2/E1/E2 as possible, as detailed in this post.

Tomorrow – let’s wrap up the week.