What Makes A Good Nucleophile?

As I said yesterday, in a substitution reaction, the nucleophile is the species that gives up a lone pair of electrons to the electrophile.

For now, let’s just think of nucleophiles as lone pairs on atoms.(Note 1). Imagine comparing two compounds, and asking “which of these is most nucleophilic?”.

So what would make one atom more likely to give up its lone pair of electrons than another? There are at least four factors.

This makes sense when you think about it, electronegativity – “greed for electrons” – is the opposite of nucleophilicity – “giving away electrons”.

Why is this? Because hydrogen bonding has a dramatic effect on nucleophilicity. In hydrogen bonding solvents (polar protic solvents) the most basic nucleophiles (e.g. F-) are surrounded by an entourage of solvent molecules. It might help for you to think that this makes them far more “sterically hindered” than they would normally be, and they are less reactive.

By contrast, the least basic nucleophiles  (e.g. I-) get involved with less hydrogen bonding, and are less hindered – therefore more nucleophilic.

Remember the Pavlovian association between “t-butyl” and “steric hindrance”  I mentioned earlier? Here it comes again!

The bulkier the groups that are adjacent to a nucleophilic atom, the slower the reaction will be (and hence the poorer the nucleophile).

Phew! that’s a lot. Here’s a little table that should help to make sense of things. 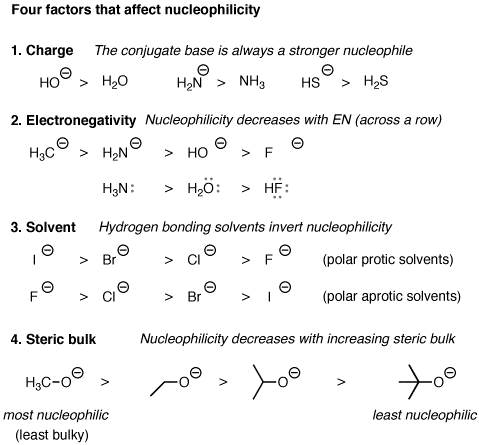 P.S. Note 1   (Pi bonds – found in alkenes and alkynes – can act like nucleophiles too, but that’s a subject for later).