Exam Tip: Don’t just bring your model kit – USE it!

Bringing a model kit to an exam and never using it.

There is nothing that causes people to leave marks on the table more than not using their model kits. Nothing. There are great students out there who know all the details of a certain sequence of reactions, but make drawing errors that end up costing them the marks on a question. You might know that bromination gets you the anti product. You might know that the E2 goes through an anti-periplanar transition state.  But if you drew the bond rotation wrong, or translated the Fischer projection incorrectly, guess what? You don’t get credit for it. I’ve seen people do 10%, 20% worse on exams they could have aced simply because they didn’t bother to use the model kit that they brought to the exam.

Look at this example. Using a line drawing or a Fischer projection to make a model is relatively straightfoward. Therefore, with the assistance of a model, converting between the two forms is fairly easy. However, in the absence of a model, converting between the two is extremely easy to screw up, and is a frequent source of error. One way to drastically minimize this type of mistake is to use your model. 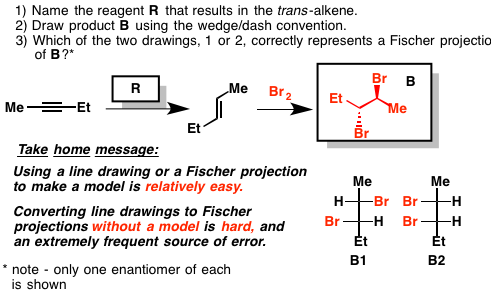 To many, actually using your model kit seems like a pain, especially in an exam which you really want to be done with and leave. Here’s what you could do. Give yourself incentives to do things that seem like a chore.How much did you spend on your model kit? $20? $30? Set that amount aside before the exam and reward yourself with something nice afterwards, contingent on using the damn thing at least once. Think of it as an investment. Is avoiding a potential 10% or 20% loss in grade worth $20 to you? With tuition rates what they are, it should be.

I’m fallible. You’re fallible. Everyone’s fallible. Wisdom lies in knowing how ridiculously easy it is to make mistakes, and the importance of having a system in place that creates redundancy so that the mistakes get caught. Using your model kit should be a part of that.

I have a similar relationship with maps. Jerusalem is a crazy city and I still get lost. Maps feel like a pain to bring along when I think I “know” how to get to a place. Problem is that we all have a persistent cognitive bias that causes us to overestimate what we know, so my overconfidence leads me to think I know things that I don’t.  However, I’m paranoid enough about avoiding this such that if someone offered me $20 to get to a place without getting lost or asking anyone, there’s a 100% chance I would not only bring my map, but use it.

There’s another way to work this.  You could do what I do, and set up a small private website using Google Sites and start a page called “Dumb Mistakes”. Update often. Read often. Take action often. For me, most mornings the second alarm clock I set in the living room is redundant…  but every once in awhile it’s a lifesaver.

2 thoughts on “Exam Tip: Don’t just bring your model kit – USE it!”