What I Learned From A Massive Memorization Project

This spring I had a weird obsession with birds. I ended up learning the names of all 875 birds of North America and trained myself to recite them from memory. It was the perfect activity for paternity leave.

I even made what might be the most boring video on Youtube. And that’s saying a lot.

Memorizing long lists of random crap like a list of birds is not a superhuman feat. It’s a learnable skill. It does take some organization and a lot of practice, however.

The starting point for me was reading “Moonwalking With Einstein” by Joshua Foer a few years ago. Here’s his article from the New York Times where he describes the method he used for memorizing decks of cards.

Foer’s book is equal parts instruction manual and personal voyage. He describes how he applies the techniques he learned from meeting with the experts of memory to win the World Memory Championships.

The methods described are not new, nor are they a big secret – it’s the old method of loci, known since antiquity and described here (Wikipedia)

In this technique the subject memorizes the layout of some building, or the arrangement of shops on a street, or any geographical entity which is composed of a number of discrete loci. When desiring to remember a set of items the subject ‘walks’ through these loci in their imagination and commits an item to each one by forming an image between the item and any feature of that locus. Retrieval of items is achieved by ‘walking’ through the loci, allowing the latter to activate the desired items.

I had tried the method of loci before but never stuck with it past an hour or so. Visualization didn’t come easily to me.

Before  I read Foer’s book, my memorization method of choice was to read things out loud, again and again, and repeat them in my mind until they stuck. Sometimes it would take hours to reliably remember a list of 30-40. This is an awful method just so you know.

What Foer’s book gave me was inspiration – that memory is a skill, not a gift, and that with some work,  it was possible to memorize long lists of interesting things.

After reading the book, I got started on a few lists of personal interest I’d always had a hard time remembering. First, using a mental map of my father’s home, I was able to put together a working mental list of geological eons, eras and periods (about 30 items) over a few time blocks on a Saturday afternoon. This blew the results of my old technique out of the water and gave me the courage to try more ambitious projects.

The second project was constellations. I used my mental map of the grounds and halls of my high school to remember the placement of the 48 constellations of Ptolemy as well as some of the most prominent stars. This took about 2 hours while I was intermittently making dinner.

What’s fun about the technique is the dreamlike quality of some of the images that arise. The image of Archie Bunker sitting in Hades (my dad’s basement) wearing a Provincetown t-shirt fanning himself  (Hadean – Archaean – Proterozoic – Phanerozoic) does not dislodge easily from my memory.

After these early projects I kind of put the memorization technique away for awhile. Then, last fall, I started getting interested in birds. One thing I’ve realized over the years is that I need to really need to encircle a topic before I truly feel confident about learning it more deeply. For instance, if I was going out birding, I’d prefer to go out knowing the names of all the birds so that I know that whatever I see, it’s something I’ve at least heard of before. Then I have a mental cubbyhole for each species that I can put more information in. In the case of birding in North America, that means learning the names of about 875 birds. Now, learning 875 birds is pretty stupid from a practical perspective, because a lot of them are things I’ll never see –  extremely rare sightings of shorebirds in the Aleutians or birds from the Bahamas that got blown off course and touched down once on Key West in 1986, but whatever. I felt that if I wanted to learn the birds, I had to do this.

In my house we happen to own the National Geographic Guide to Birds of North America, 3rd edition, which is what I used. This edition divided the 875 birds into about 100 categories. My plan was to be able to memorize this list of 100 bird categories reproducibly, and then use this as a starting point for the full list. 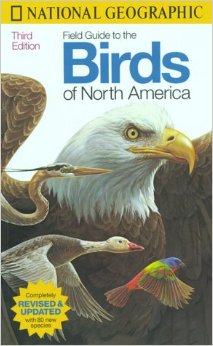 I did this by coming up with vivid images for each bird category and then distributing them through a familiar mental landscape – the first lab I worked in. I put loons on the front door, hung albatrosses from the ceiling, put partridges and quails in the glovebox, phalaropes in my fume hood, owls in the sink – birds everywhere. This actually took awhile to do – a few minutes a day, over 2 weeks or so.

I figured if I could successfully memorize a list of about 100 bird categories, then to complete the 875, I would just have to repeat this 7 or 8 times.

Once I had the category list in my memory, the next step was to expand it into a bird list. I began by making an Excel sheet of the 875 species. Then, I divided this list into about 7 chunks of sizes with sizes ranging from about 100 to 150.

I also decided to give myself a reward for the successful completion of each stage: a small bottle of chocolate milk.

The Curious Mental Stages Of Working On A Large Memorization Project

Before setting out, the project seemed impossibly long to complete and I doubted I’d be able to do it. In fact, once I got over my own internal whining, it took about 2-3 weeks to get the first list right (mostly loons, grebes, albatrosses, petrels, shearwaters, and other water birds).

About a month later the second and third chunks were complete. By this stage I’d been on the bird project about 2 months and I’d barely got through a third of the bird book. It no longer seemed like an impossible project, but it did seem like it would take a ridiculously long amount of time.

Then, about halfway through the book, something interesting happened. I’d spent so much time coming up with mental images for bird names that I started getting quite fast at it. My skills were improving and the length of time required for each chunk was getting smaller and smaller. I remember finishing the fifth chunk (up to bird #600 or so) and thinking, holy crap, I’m actually going to finish this.

Memorizing chunk #6 took less than 5 days. It was then that, with the end in sight, and confident that I could finish, that I started getting slack about finishing the project. It wasn’t for a few more weeks that I went about wrapping up chunk #7, which again, took about 3-4 days. The funny thing was, looking back after doing chunk #7, I thought, “this project wasn’t so hard”. Which, like the “it’s impossible” line I’d earlier fed myself, was not exactly true.

The key lesson here was that my improved skill level had allowed me to accelerate to the end much faster than I expected at the beginning of the project. My visualization muscles had bulked up considerably.

Putting It All Together

At this point I’d learned each of the chunks separately, but had yet to read them all out consecutively. This meant going back to my earlier lists and re-memorizing them. Thankfully, after each stage, I took careful notes detailing the exact images and locations I used for each bird, so it was fairly straightforward.

The tough part was mastering the small details.  Getting a chunk 98% right was reasonably easy. But doing a perfect reading, where no bird or detail was forgotten, was extremely time consuming. It seemed like every time I was forgetting some nuance, like whether it was a Great Black-Backed Gull or a GreatER Black-Backed Gull.

With the benefit of a long car ride to Ontario and back, I was able to string most of the chunks together, which ended up taking 40-45 minutes. Each time I’d forget one or another small detail and put it on the list of things to remember for next time. After practicing a full reading on my own, the time finally came to do a reading for the camera – “proof” for myself that I’d actually achieved the goal so that I could, in my own OCD way, say, “Goal Achieved”.

So, while taking care of my newborn boy one afternoon, I sat down in front of the computer and did a reading. As it turned out I missed all the Vireos and the Laughing Gull, among a few others. Later I did another reading where I think I only missed one or two, but the video didn’t turn out as well. So I’ve decided to just post the flawed reading.

Like I said at the beginning, memorizing lists is a learnable skill.