Home / “Is This Molecule Aromatic?” Some Practice Problems

“Is This Molecule Aromatic?” Some Practice Problems

Our last post in this series on aromaticity went through the 4 conditions a molecule must fulfill in order to be aromatic.

In that post we tried to explain what each of those rules meant – so if any of these individual items seem unclear to you, it might be a good idea to go back to that post.

In this post,we’re going to apply these 4 rules with some practice examples.

1. A System For Determining If Molecules Are Aromatic: Build A Table

Here’s my tip for those of you getting started on trying to answer the question “Is this aromatic?” . Make a table.

Tables are great for organizing information. They also serve as a built-in checklist.

For instance, here’s an image from a tutoring session I did with a student where we determined whether or not several molecules were aromatic: 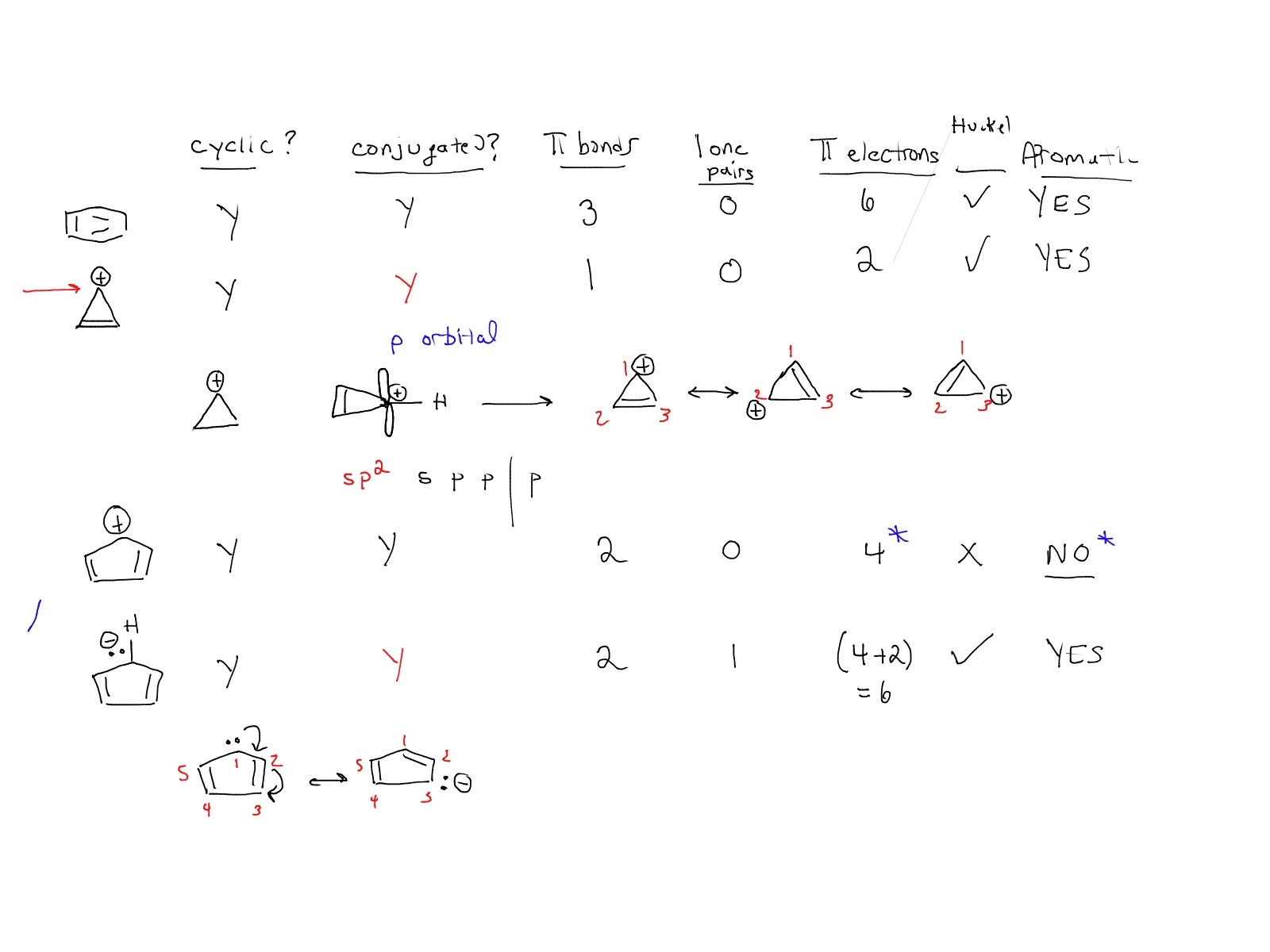 You’ll notice that my checklist doesn’t usually bother having a column for “flatness” because it’s generally assumed. (You need to know the few exceptions that come up – we covered that last time).

Today, we’re going to look at the following 13 molecules and try to determine if they are aromatic or not:

The easiest example to start with is benzene, and it demonstrates how to use the table.  It’s cyclic, conjugated, has 3 pi bonds and those pi bonds are all in the pi system. It has zero lone pairs that contribute to aromaticity. Therefore it has (3 × 2) + 0 = 6 pi electrons. We’re assuming it’s flat (it is). Checking off all the boxes, we can say that it’s aromatic.

If you remove a proton from benzene, you get the benzene anion. Like benzene, it’s cyclic, conjugated, had 3 pi bonds and those pi bonds are all in the pi system. It’s tempting to look at that lone pair and to think that it might contribute to the pi system as well, giving 8 pi electrons total. However, that lone pair is in the plane of the molecule (along with the other C-H bonds) and thus can’t overlap with the p-orbitals. Therefore, for the purposes of determining aromaticity, we can ignore the lone pair.

The cyclopentadiene cation below is cyclic and conjugated (that positive charge represents a carbocation with an empty p-orbital). There are two pi bonds and zero lone pairs to contribute to the pi system. This gives us 4 total pi electrons, which is not a Hückel number.  Therefore it isn’t aromatic.* [Note 1]

If pyrrole is protonated on the nitrogen, the lone pair can no longer participate in the pi-system. Therefore the molecule drawn below is not aromatic.

Pyridine is cyclic, conjugated, and has three pi bonds. It’s a lot like the benzene anion in that the lone pair looks like it might contribute to the pi system, but in fact is in the plane of the ring (along with the C-H bonds) and thus cannot contribute (the nitrogen is already contributing a p-orbital towards the pi-system – note that it’s drawn as participating in a double bond with an adjacent carbon).  Therefore we can ignore the lone pair for the purposes of aromaticity and there is a total of six pi electrons, which is a Huckel number and the molecule is aromatic.

Thiophene, the sulfur analog of furan, is cyclic and conjugated all the way around the ring. It has two pi bonds. What’s interesting about thiophene (and furan) is that although there is an atom bearing two lone pairs in the ring, we can only count one of those lone pairs toward the pi-system. [Each atom can contribute a maximum of one orbital and two electrons towards aromaticity]. The other lone pair is in the plane of the ring, much like the lone pair on the nitrogen of pyridine, above. Therefore thiophene has six pi electrons total, which is a Huckel number, and thiophene is aromatic.

Cyclobutadiene is cyclic and conjugated. There are two pi bonds and zero contributing lone pairs. Two pi bonds gives us a total of 4 pi electrons, which is not a Huckel number. Therefore it is not aromatic, just like the cyclopentadienyl cation, above. [Note 1]

Cyclobutadiene is not aromatic. If we somehow pump two electrons into cyclobutadiene, however, then the situation changes considerably. The cyclobutadiene dianion is cyclic and conjugated. It has a single pi bond, and now two carbons bearing lone pairs which can contribute to the pi system, giving us a total of six pi electrons. This is a Huckel number and thus the cyclobutadiene di-anion is aromatic!

Naphthalene has two rings and is thus a bicyclic compound. It is conjugated around the perimeter of the rings and there are a total of 5 pi bonds and zero lone pairs, giving us 10 pi electrons total. 10 is a Huckel number (satisfying 4n+2 for n=2) and naphthalene is an aromatic molecule.

The pyrylium ion is a six-membered ring that, like benzene, has three pi bonds. It also bears a lone pair on the oxygen. Like pyridine and the benzene anion, this lone pair is actually in an orbital at right angles to the pi system so it does not in fact count towards aromaticity. Therefore the molecule has only 6 electrons in the pi system and is in fact aromatic.

Indole is a bicylic molecule that looks like a molecule of benzene fused to a molecule of pyrrole.  It is conjugated; every atom around the perimeter of the two rings participates in the pi system. It has 4 pi bonds and a single pair of electrons on the nitrogen that participates in the pi system, giving 10 pi electrons in total. This is a Huckel number and indole is in fact aromatic.

Azulene is another example of a bicyclic molecule, like naphthalene and indole, above. It’s conjugated all around the perimeter of the pi system. There are five total pi bonds and zero lone pair electrons, giving a total of 10 pi electrons, which is a Huckel number. And azulene is, in fact, aromatic.

If it’s hard to visualize azulene as aromatic, it might be helpful to draw a resonance form where both rings look like they have aromatic components. For example, in the resonance form below, you can think of azulene as being composed of the cycloheptatriene cation (aromatic) fused to the cyclopentadiene anion (also aromatic).

Note that one ring bears a negative charge and the other one bears a positive charge. It turns out that this resonance form has a significant contribution to the hybrid, since azulene itself has a substantial dipole moment (1.08 D). Naphthalene, in contrast, completely lacks a dipole moment.

The whole point of using a table like the one above is to organize your thoughts. Like a set of training wheels, if you do problems like this often enough, you’ll start to find that you don’t need it.

The most common part where students get tripped up is in counting the number of pi electrons. Just remember that each atom can at most contribute one p-orbital towards the pi system, and that the p-orbital can have (at most) two pi electrons.

Are there any other examples you’re not sure about that we should apply this system towards? Leave a comment!

Note 1.  there are two molecules in particular in the list above which will deserve further discussion. The cyclopentadiene cation and cyclobutadiene were each described, above, as “not aromatic”, which is technically true.

Just as we saw that benzene is unusually stable compared to the theoretical “cyclohexatriene” , cyclobutadiene and the cyclopentadiene cation are interesting in that they are unusually unstable. This is a property called “antiaromaticity”, which we will describe in some detail in a future post.

Thanks to Matt Struble for assistance with this post.

38 thoughts on ““Is This Molecule Aromatic?” Some Practice Problems”