Acids are like an aphrodisiac for carbonyl compounds: it makes them more likely to react with nucleophiles.

Let me explain.
I said the last two days that carbonyl carbons are important electrophiles: they bear a partial positive charge.

Now, I’m going to show how you can make them even more electrophilic – more reactive. This means that reactions that normally wouldn’t happen, will now happen.

Simple: we take electrons away from them!

How can we take electrons away? With carbonyls, the answer might be a bit counterintuitive. We’re going to add acid to the oxygen, and this will make the carbon more electron-poor.

Sounds weird, but it actually makes sense when you think about it.

Think about the resonance forms of the carbonyl:

With me so far? If this isn’t clear, write me! If everything is OK, let’s keep going.

Think about what this does to the resonance forms.

That means that the carbon will be more electrophilic – and therefore, react faster with nucleophiles! 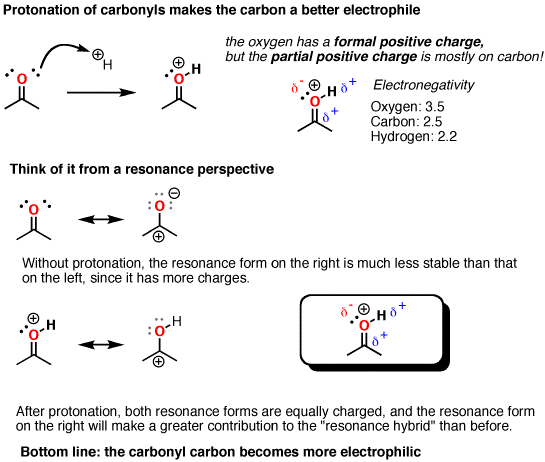 So why is this important? It’s important because it allows certain reactions to happen that would never proceed otherwise.

When will it be important? Really soon! It’s important for the formation of acetals, which is coming right up. It will also be KEY for the next few chapters involving carbonyl chemistry.

Tomorrow: let’s talk about the SECOND-most important mechanism step for carbonyls.
Thanks for reading! James