The Nucleophile Adds Twice (to the ester)

With ketones and aldehydes, things were pretty simple. Nucleophiles added to them (remember: the “addition” mechanism), we add acid, and things stopped there. Two steps: Addition, then protonation

With esters, reaction mechanisms are going to become a little longer. But hopefully not much more complex.

It’s all going to come back to the two key mechanisms in carbonyl chemistry: addition, and elimination.

Let’s focus on elimination today – and compare the reactions of Grignards with aldehydes and esters.

The first step in both reactions is the same: addition.

But the two products after the first step are different.

And that’s what happens next: elimination. This means we make a new ketone, which can then perform a second addition. Now, we’re at the same point we were when we added a Grignard to the aldehyde: no good leaving groups. So it sits there until we add acid.

It’s the same mechanism as that for addition of LiAlH4 to esters. Here’s a little graphic comparing the two. 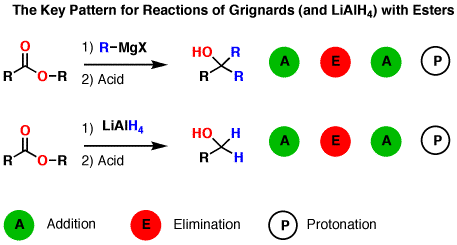 Tomorrow: let’s talk about some other addition-elimination reactions.
Thanks for reading! James