In organic chemistry, you’ve probably seen (what seems like) a million examples by now of how a series of simple processes can build into something more complicated.

This is especially true in the chemistry of aldehydes, ketones, and carboxylic acid derivatives, where reactions and mechanisms can build on each other like a pyramid.

Today’s example goes by two different names, but the process is simply a combination of several different reactions you’ve already encountered.
They are:

This process goes by two different names, depending on what you start with.

If you start with a 4 carbon chain with an ester at one end and a ketone two carbons over, this is called an “acetoacetonate ester” (knowing the name isn’t crucial) and the process is called the acetoacetic acid synthesis.

Let’s look at these two: 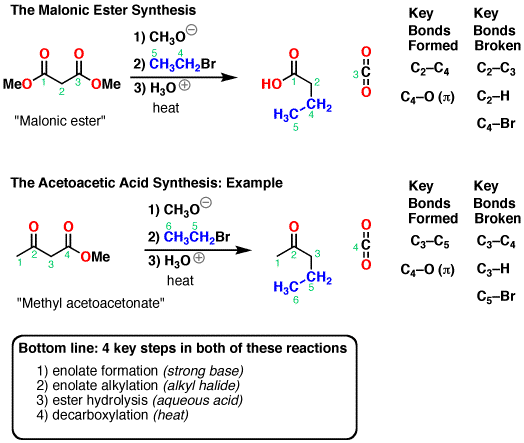 So what we end up doing is forming a carboxylic acid (in the top example) or a ketone (in the bottom example).

So if you learn to recognize the key patterns here – how the product is derived from the starting materials – it will make your life a lot easier. Because each of the steps we talk about here are reactions we’ve learned before – we’re just putting them together in a new combination.

Tomorrow: let’s wrap up the week.