This email might take you a while to digest but it will be worth it. Because at the end, you’ll (hopefully) see that what look like 11 different reactions are in fact 11 different variations of the same reaction.

There’s a ton of repetition in the mechanisms of carboxylic acid derivatives.

Addition – Elimination. Two words, so many combinations. But they all boil down to the same process.

Like I’ve said before, elimination reactions depend on leaving group ability. And good leaving groups are weak bases.

Let’s look at some different carboxylic acid derivatives, and rank them in order of their leaving groups. 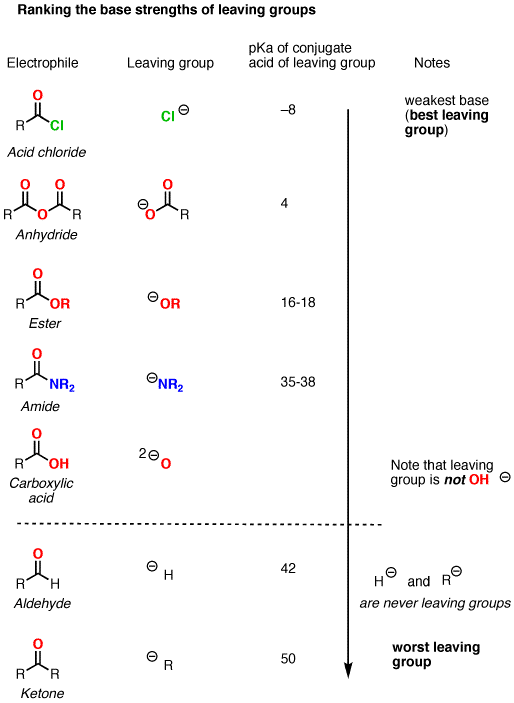 This is going to be be awesome for figuring out if different reactions work or not. Why?

Because of this:  if the leaving group is a weaker base than the nucleophile, the reaction should be favored. * Just like acid base reactions (remember from way back – stronger acid plus stronger base gives weaker acid and weaker base?)

Let’s use this to figure out whether some reactions will work or not.

There are 25 different combinations. But using this simple principle, we can rule out about 15 of them. 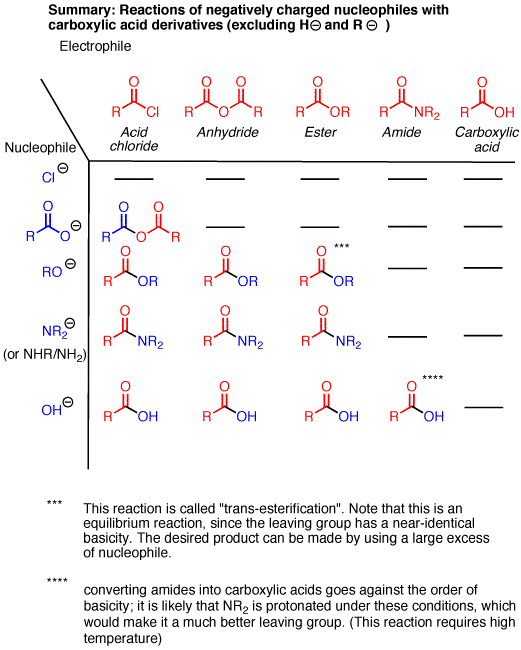 All of these reactions proceed through the two step mechanism. It’s really simplifying to know that the 11 products shown here don’t represent 11 different reactions, but 11 different variants of the same reaction.

Thanks for reading!
James

P.P.S. Note that this only applies for *negatively* charged nucleophiles, not the reactions where we’re using acid catalysts.