First of all, yesterday I said that amines are good nucleophiles. Waaaay back in Org 1 you probably talked about nucleophilic substitution (remember the SN2? backside attack?)

Amines, being nucleophiles, can certainly participate in this reaction with alkyl halides. However, you probably didn’t see many examples of amines in this reaction. Why not?

Well, amines have the same relationship with alkyl halides that I have with potato chips. It’s hard to have just one.

It’s impossible to get this reaction to just stop after one alkylation. So even if you add only one equivalent, you’ll still get a mixture of product. If we add a large excess of alkyl halide, we can get one product – the “quaternary ammonium” salt.

Quaternary ammonium salts are not very exciting chemical species. However, they do perform one interesting reaction.

The ammonium (NR3)+ is a good leaving group. Treatment with a base will lead to  E2 reactions, where we form an alkene. This is called the Hofmann elimination. A common base for this is silver oxide (Ag2O) although many other bases will also work. 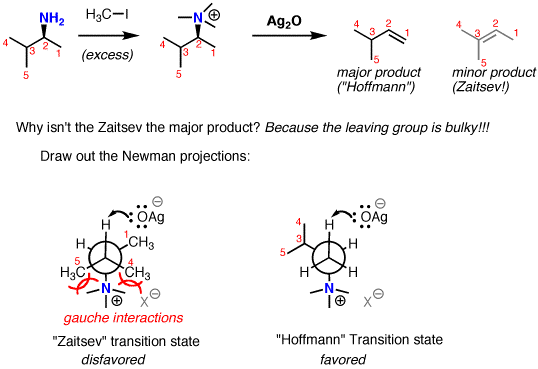 Bottom line: ammonium salts are bulky leaving groups, and from them we obtain the “non-Zaitsev” alkene.

Tomorrow: a nifty way around this problem helps us make primary amines.