When I first learned about acetals and hemiacetals in organic chemistry, I thought “what’s the point”? These are the most boring functional groups ever known. They don’t do anything!

This is true. Acetals don’t react with Grignards, nucleophiles, oxidants, reductants, bases, or much else. They only react with aqueous acid, which gives you back the starting aldehyde/ketone.

For now this makes them boring.  Later on, we’ll see that they actually have a use (acetals in particular). They are the “painter’s tape” of functional groups… (like when you want to paint a wall with an electrical outlet, so you cover the outlet with tape, and peel it off when you’re done… more on that when we talk about synthesis in a few weeks).

Let’s have a closer look at acetals and hemiacetals.

Hemiacetals are obtained through the addition of alcohols to aldehydes or ketones. They usually aren’t very stable, so it’s an equilibrium process. Reversal of the reaction to give back the ketone or aldehyde is common.

Acetals can be made when you treat an aldehyde or ketone with an alcohol in acid. Acid helps in two ways: it makes the addition reaction faster (aphrodisiac!) and it also helps the elimination reaction (better leaving group). I’m not going to ruin your day by putting the whole mechanism in this little email, though. For a full walkthrough, check out the page in the Reaction Guide. 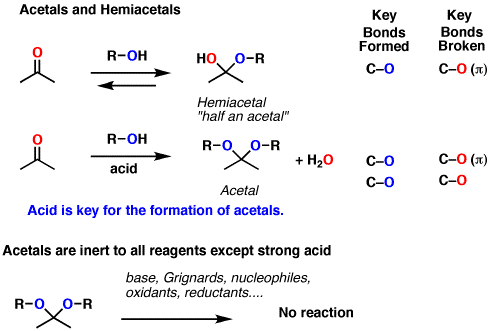 For now, the most important thing is to look at in this mechanism is how it’s built up of SIX tiny little sub steps.

Breaking down these big honking mechanisms into little sub-steps will be key. More on this soon.
Tomorrow: let’s talk about the nitrogen-containing “cousins” of aldehydes and ketones.

P.P.S. On Acetals and Hemiacetals