OK. As I said yesterday, the Robinson Annulation is a reaction that takes a ketone and an alpha,beta unsaturated ketone (sometimes called an “enone”) and transforms into a six-membered ring.

Of all the reactions you learn, the mechanism for this one is one of the longest.

But my aim for this post is to try and help to condense it down into a short formula that you could recall readily if asked.

The Robinson is a two step sequence consisting of reactions you’ve learned by now: the Michael reaction and then the Aldol Condensation.

First, the Michael Reaction: this proceeds in 3 steps. 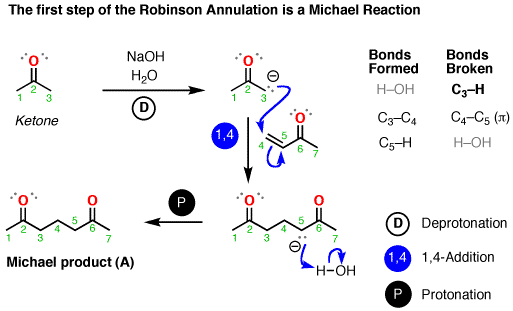 However, if this product from the Michael reaction is heated in base, something interesting happens. Base can remove another proton – from C1 or C7, although C7 is shown here – and the resulting enolate can add to the ketone 6 bonds away, in an addition reaction.*

Here, like a snake biting its own tail, the enolate nucleophile adds to the ketone, forming a ring. Make sure you can see this – we’re forming a bond between C2 and C7.

Then, we protonate (P) the oxygen, and then deprotonate (D) carbon 7 again. This forms an enolate, which then leads to elimination of water. Note here that elimination is a different kind then I’ve been talking about – it’s  1,4- elimination (E14), the opposite of 1,4-addition, and it leads to formation of a new C-C Pi bond. 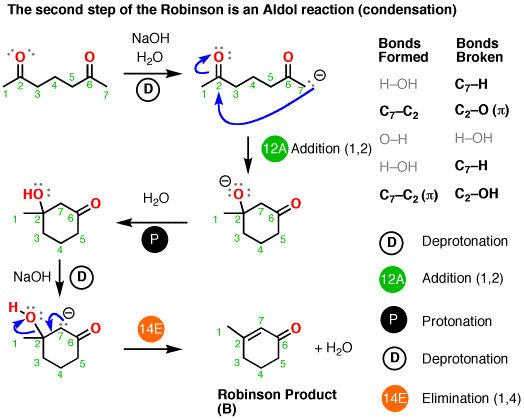 That’s eight steps. Quite a lot to remember – but if you’re given the starting material and the product, and are armed with the abbreviations for each of the steps, it shouldn’t be *too* hard to attack it.  Think of it like a big puzzle. There’s a logic to how things piece together.

Tomorrow: another combination reaction, one that takes two reactions we’ve already learned and smushes them together.

P.S. *Hold on! Why didn’t this happen earlier – like at the end of the Michael reaction?

Well, it didn’t happen because in organic chemistry, 3 and 4-membered rings are tough to form. Remember ring strain?

On the other hand – 5 and 6 membered rings form quite readily.